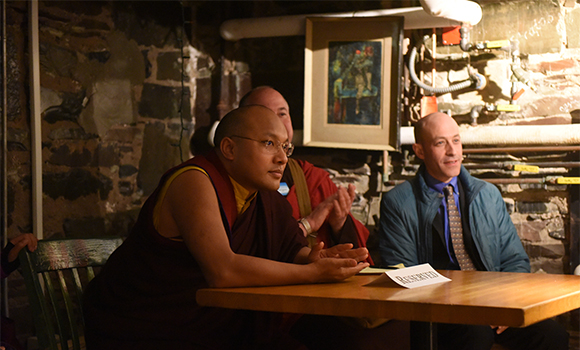 (March 31, 2015 – Princeton, New Jersey) Shortly after arriving at Princeton University, His Holiness the 17th Karmapa departed the welcome reception held in his honor at the home of the master of Forbes College at Princeton and headed to an underground cafe to attend an open mic night. The student-run weekly open mic has an explicitly spiritual focus, and students read their poetry, performed musical compositions, and read short stories reflecting their Christian, Jewish and Muslims faiths. One non-Buddhist student read a short story depicting her wait to meet His Holiness the Dalai Lama in India, and a Catholic magician made small objects multiply as a demonstration of how a sense of wonder can allow faith to increase and be shared. Bowls of chocolate chip cookies were passed around during this event, which provides an explicitly alcohol-free option for students seeking such an alternative.

The evening event, which marked His Holiness’ first evening at Princeton, reflects the student-centred orientation of his time at Princeton. Each of the various university visits was crafted to allow the 17th Karmapa to engage with a slightly different aspect of university life. One of His Holiness’s aims in making this university tour is to connect more deeply with students and to enhance his exposure to their experiences as young people. His schedule at Princeton was designed with extensive student input, and students themselves helped facilitate his visit. The students had invited His Holiness to attend their open mic night to share with him one aspect of their extracurricular lives that they consider formative to their lives as university students.

During his second day at Princeton, His Holiness will meet with a student activist group that had recently attended a spiritual retreat, and then will share a meal and discussions with a gender-studies group. Following that, he will deliver his university lecture, on the environment, gender and activism. Day two will continue with more student and classroom engagements.