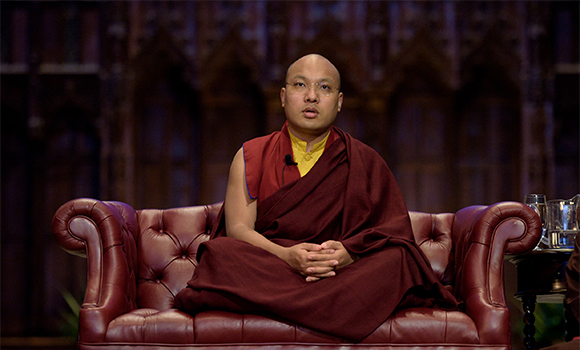 “It is important to remember that the restoration of women’s rights and the full empowerment of women must go far beyond mere external appearances and institutionalized mechanisms or structures,” the Karmapa said.

“Such necessary steps as restoring the full monastic ordination for women in my own tradition, famous historical steps such as women’s suffrage, and even the election of a woman as president—these steps are in themselves not enough to truly restore women’s rights, or to truly empower women.”

What we need, the Karmapa said, is genuine understanding, love and respect.

“We need mutual understanding and it has to be real. It cannot be fake or contrived. It has to be loving and respectful—and it has to be founded in basic human benevolence and caring for one another.”

The Karmapa’s call to action rang through the tightly packed rows of pews. The young audience listened rapt, as His Holiness’s voice echoed through the vast domed spaces of the chapel.

During his talk the Karmapa pointed out that many countries have used legislation and social pressure in their efforts to protect and promote women’s rights. His comments echoed themes he had raised earlier in the day during interactions with students in the gender studies department and with a group of student activists.

“Yet in spite of legislation, social pressure and political correctness, women still suffer inequality,” he said. “So I think the solution lies beyond mere legislation and social pressure. We must try to truly develop love, understanding and an authentic concern for one another.”

His Holiness explained that the main aim of this visit, his third to the United States, was to visit the nation’s great universities. After enjoying several in-depth collaborations with groups of US college students who had visited him in India, including many students who were around his own age, the Karmapa had felt a strong wish to see a glimpse of their experience.

“It may be difficult for normal people to imagine the challenges that someone like me has to face,” he said. “I suppose some people imagine that being a spiritual leader one leads a life of comfort, luxury and ease, but let me assure you that is not the case. It is filled with challenges and difficulties of all kinds.”

Yet these very difficulties enabled him to increase his empathy and concern for others.

“Experiencing many challenges has enabled me to develop greater and greater concern for the difficulties that others face. This is actually what has made me sensitive to and concerned with issues such as gender inequality.”

As he continued his exploration of the topic of gender inequality, the Karmapa returned to the need for restoring bhikshuni, or full ordination for nuns, within Buddhism. As Princeton Dean of Religious Life, Alison Boden, had explained in her introduction, His Holiness himself this year had historically initiated concrete steps to reestablish full ordination for women in his lineage. His Holiness pointed out that this is not just a spiritual or religious issue, nor is it simply an issue about vows.

“This issue goes to the very heart of the need to protect and promote the rights of women, their empowerment, and to support their innate capacity for leadership,” he explained.

The Karmapa fielded a range of questions submitted in advance by Princeton students. The topics ranged from different emotions that can motivate activism to how to preserve our connection to the natural world when living in large cities. When asked for his own views on gay, lesbian and transgender relationships, the Karmapa began by cautioning that his views should not be taken as an expression of the doctrinal Buddhist position on the matter. Rather, although he acknowledged that people might take anything the Karmapa said to be the Buddhist view, he was expressing his own thoughts on the matter.