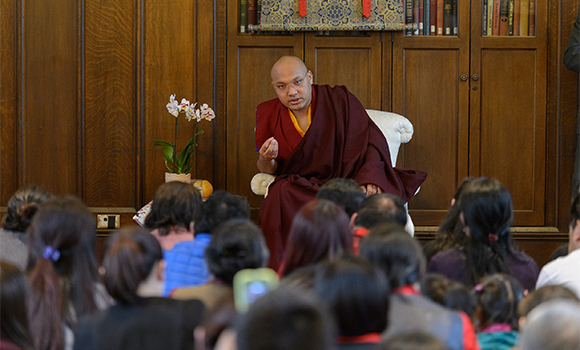 (March 27, 2015 – Cambridge, Massachusetts) The 17th Gyalwang Karmapa this afternoon signed the famous Harvard Guest Book, marking a successful conclusion to his two-day visit to the country’s oldest university. Yet his activities in the Boston area were not complete until he had met with the city’s Tibetan community.

Harvard Divinity School graciously offered a space for the Tibetan community to come to meet with the Gyalwang Karmapa. As His Holiness the Karmapa descended the stairs to the hall that had been prepared for the event, a group of Tibetans sang to greet him. The heart-wrenching sound of Tibetan singing echoed through the stairwell as if bouncing off towering mountainsides, and for one brief moment the distance from the culture’s native home seemed to disappear.

Since the meeting was scheduled for a weekday afternoon, some 300—or about half of the 600-plus members of this hardworking community were expected to attend. However, after the hall had filled to capacity, several hundred Tibetans were still left outside in Boston’s afternoon chill. The Gyalwang Karmapa agreed to address two separate audiences.

He addressed each successive group of Tibetans separately, expressing how deeply important it was to him to meet with his fellow Tibetans wherever he went. He spoke of the importance of averting the possible loss of Tibetan language and culture. “We all carry this responsibility to uphold Tibetan language and traditions, and we are carrying it together,” he told them. He reflected that the Tibetan people had never been more united than they are in this historical moment, and described their extraordinary good fortune to be facing the challenges of preserving their culture in diaspora under a unifying leader like His Holiness the Dalai Lama.

“We are so fortunate to be under his leadership,” he said. “I am afraid we may not truly recognize how valuable this is until it is too late.”

Speaking movingly of the value of the moral guidance of His Holiness the Dalai Lama, the 17th Karmapa urged the Tibetans to take courage from the fact that they did have his leadership and to treasure and follow it.

In this way, the ushers filled the room once, emptied it and then brought in a second group. Even so, another 40 Tibetans had been unable to enter the hall either time. Taking care to include each and every Tibetan, the monks in his entourage lined up the last group of Tibetans, and His Holiness the Karmapa gave individual blessings on his way to his vehicle, waiting to take him to his next stop on this two-month journey.