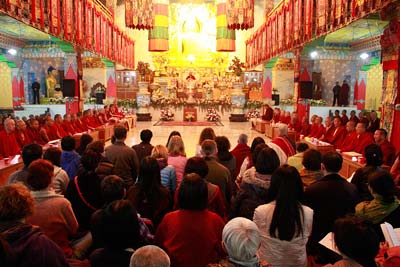 For all those who had remained in Bodhgaya following the successful conclusion of the Kagyu Monlam Chenmo on December 22nd, Gyalwang Karmapa turned New Year’s Day 2011 into one to be remembered.

On December 31st His Holiness announced that the following morning there would be a special puja to celebrate the official Indian and Western New Year.

At 8:30am on January 1st 2011 more than a thousand people crowded in to the main shrine room at Tergar Monastery to join His Holiness in morning prayers, including prayers for auspiciousness, Refuge Prayers, The auspiciousness of the twelve deeds, King of aspirations and Milarepa’s aspiration, in the coming year. The congregation included Mingyur Rinpoche and his brother, Tsoknyi Rinpoche, 250 junior monks from Mingyur Rinpoche’s monastery, Kagyu monks and nuns, and others from diverse Buddhist traditions, lay devotees of the Gyalwang Karmapa, Kagyu Monlam staff who had stayed on in Bodh Gaya, and, in addition, several hudred of Mingyur Rinpoche’s students who had arrived for his annual teachings on the “Joy of Living” and the “Path of Liberation” at Tergar Monastery.

As is traditional in a celebration, Tibetan tea and special sweet rice were served as part of the ceremony.

After the prayers concluded, His Holiness wished everybody “Happy New Year” and invited them to a special Mahakala Puja in the late afternoon, followed by a New Year’s Dinner for everyone.

The congregation gathered again at 5.30pm, as His Holiness personally led the Mahakala Puja as Umze. Although Mahakala is the Dharma protector most closely associated with the Kagyu lineage, His Holiness recited a practice for the two-armed Bernakchen, an emanation of Samantabhadra.

While the majority of people were in the shrine room listening to His Holiness, many others were busily preparing the dining area for more then 1000 guests, under the supervision of a small group of Taiwanese nuns from the Kagyu Monlam team. The drab dining hall upstairs was transformed by yellow, white and blue cloth into a huge tent-like space, decorated by the Karmapa dream flag and its associated colours. Tables were laid with tablecloths, cutlery and carefully arranged fresh flower decorations.

Although the Kagyu Monlam Chenmo concluded on 22nd December, the Gyalwang Karmapa and his entourage remained at Tergar Monastery, Bodhgaya until the beginning of January 2011.

On the morning of 3rd January, His Holiness left Tergar Monastery at 7.30am for a final visit to the Mahabodhi Stupa, where he paid homage to the Buddha in the main shrine room, before proceeding to Patna Airport for his flight to New Delhi.

His Holiness Karmapa will give a four-day Spring Teaching at Vajra Vidhya Institute, Sarnath (Varanasi) from March 9-12, 2011.