Karmapa in Manhattan: Tibetan Community Turns Out in Force 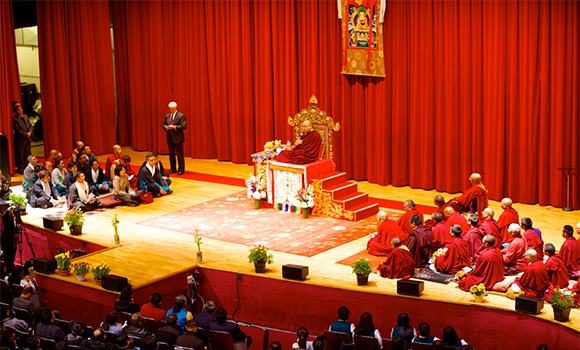 (April 10, 2015 – New York, New York) On his first day in New York City, His Holiness the Karmapa devoted time to meeting with the area’s substantial Tibetan community. The Tibetan Community of New York and New Jersey booked Hunter College’s 2,000-seat Assembly Hall and filled it to capacity, as Tibetan families from around the region gathered to catch a glimpse of the Gyalwang Karmapa and hear him speak. Outdoors, a troupe of masked “tashi shokpa” dancers turned heads on the gritty streets of Manhattan’s Upper East Side, as they waited on the sidewalk to welcome him in the traditionally auspicious way. Indoors, twenty lamas and members of the ordained sangha stood on the stage, holding khatas to receive him.

“I am honored that you have undertaken such efforts to come see me,” the Karmapa told the audience. He commented that since Tibetans living in the New York metropolitan area have the invaluable opportunity to receive advice from His Holiness the Dalai Lama virtually every year, he himself could offer nothing further of value. Nevertheless, the Gyalwang Karmapa said, it was important to him personally to reach out and connect with his fellow Tibetans wherever he traveled, and therefore he was happy to have the chance to spend time with them.

The Gyalwang Karmapa spoke movingly of the emotional toll taken by leaving their homeland and coming into diaspora. “We share the same origins. We come from the same place. We know each other’s suffering,” he said.

He went on to reflect on Tibetan history from the time of the Dharma kings in the 7th to 9th centuries, and commented that since that era, Tibetans had never been as united as they were today. The Gyalwang Karmapa recollected that where he was born in the region of Kham in eastern Tibet, they referred to people living in U and Tsang in central Tibet as “Tibetans,” and by contrast, referred to themselves as “Khampas.” Tibetans have long been pulled apart by sectarian identities as well as geographical identities, he noted.

“If one person had set about to unite us intentionally, I doubt that anyone could have managed to do so,” he said. Yet today the sense of a shared identity as Tibetans has become vivid and clear.

“How were we able to pull together and join forces despite this tremendous diversity and the lack of a self-understanding as Tibetans?” he asked. The force that brought them together, the Gyalwang Karmapa indicated, is none other than the unifying leadership of His Holiness the Dalai Lama.

The Gyalwang Karmapa reflected on the conditions of democracy that opened the path for greater independence of thought within Tibetan society. As do the teachings of the Buddha himself, democracy encourages people to think for themselves, he said. It is important that one not simply blindly follow whichever leader happens to have the reins, but to analyze and reflect more deeply on the qualities that make a leader such as His Holiness the Dalai Lama truly worth following.

His Holiness the Karmapa further encouraged his audience to be more proactive in preserving Tibetan culture and language. “Do not just leave this task to the associations,” he said. “We all have a part to play in carrying this responsibility.”

At the same time, he particularly encouraged Tibetans to look for ways to keep their Tibetan identity alive in a way that is compatible with the context in which they are now living. He also spoke strongly in favor of Tibetans gaining higher education and professional expertise.

He devoted his remaining time to the topic of sectarianism and rivalry within the Tibetan community. He spoke bluntly and forcefully of the historical conflicts that Tibet had seen, and asked them to take special efforts to ensure that the harm done by sectarian rivalry remains a thing of the past. The Gyalwang Karmapa reminded his audience of the prediction made by Buddha Shakyamuni himself that it would be intersectarian fighting that would bring about the destruction of the Dharma, rather than any external foe.

“Take care not to become a cause for the destruction of Lord Buddha’s teachings through your attitude and speech towards other schools,” he said.

He used the analogy of the statements made during some empowerments to the effect that a certain deity is superior to all other deities in point of compassion or wisdom and so forth. The aim of such statements is to inspire faith, and is not at all meant to imply that other deities are somehow inferior. Similarly, if at times, some texts or teachers praise their own lineage, this is in order to enhance the disciple’s appreciation of the practices of that lineage and not in order to disparage other lineages. Each of the distinct schools and lineages within Tibetan Buddhism is valuable and forms a part of what all must work together to preserve.

Finally, he observed that in some refugee communities, there can be a tendency to feel envy when people see one member of the community prospering, and to want to bring them down. This sort of personal jealousy is harmful to the community as a whole, he said. “In fact, whenever we see a member of our Tibetan community doing well, this is a cause for us all to celebrate.”

As the moment drew near for His Holiness the Karmapa to depart, he descended the throne and stood gazing one moment more out at his fellow countrymen, before leaving the stage for the next step on his journey.