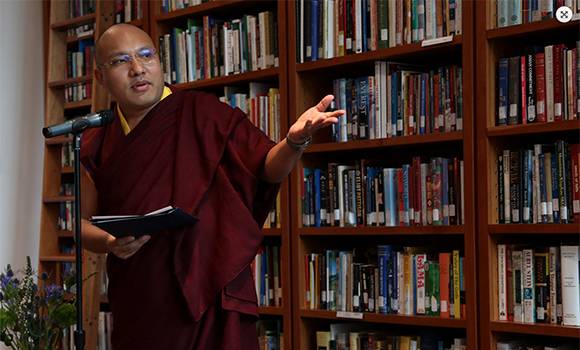 (April 10, 2015 – New York, New York) Like many other aspects of Tibetan art and culture, Tibetan poetry has undergone significant shifts in content, form and contexts of practice since 1959. Latse Library this evening hosted an event that very much belongs to the post-1959 practice of poetry in Tibetan: a poetry reading. Tonight’s reading of Tibetan poems was only the second such event to take place in North America, although the practice is now better established in other Tibetan communities.

Many luminaries of the modern poetry movement in Tibetan were present at Latse Library this evening to read their verse before a rapt audience in this research library devoted to modern Tibetan studies. Among the eight poets reading their verse was Jangbu, a poet living in France who pioneered the use of free verse in Tibetan. With His Holiness the Karmapa listening attentively to the poets’ oral renditions of their verse, a succession of regional accents, themes and poetic styles provided a demonstration of the tremendous diversity and vibrancy of Tibet’s poetic culture.  Several poems originally composed and read in English gave an added glimpse of the extension of Tibetan ways of being into new local contexts.

At the conclusion of the event, the hosts printed one of His Holiness the Karmapa’s poems and handed it to him with a sincere request that he read it. After commenting that although he hardly merited the name “poet,” (they had made it hard to deny that he had written something along the lines of poetry), His Holiness read one of his own poems, composed in free verse: Anniversary Poem, which he wrote in honor of the 900th anniversary of the birth of the first Karmapa, Dusum Khyenpa.

Afterwards, the Karmapa shared a meal with his fellow poets, and then left to spend the remainder of his evening with an audience of 2,000 Tibetans living in the greater New York area. His meeting with the Tibetan community directly following today’s series of excursions around Manhattan to view traditional as well asmodern Tibetan art and to listen to fellow practitioners of poetry. When he urged the Tibetan community members to each play a part in not only preserving Tibetan language and culture, but also keeping it relevant to today’s context, it was clear he spoke from the freshness of today’s experiences, and was lending his own voice to the collective project of bringing Tibetan art, language and culture fully into the 21st century.