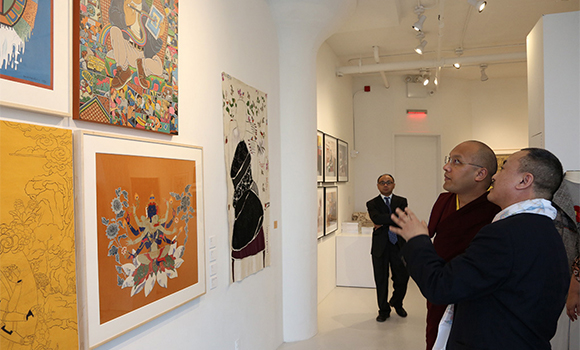 (April 10, 2015 – New York, New York) After exploring Tibet’s pre-modern art at the Rubin, His Holiness the Karmapa turned his attention several centuries forward, attending an exhibition of modern Tibetan art by artists working both inside Tibet and in diaspora.

Co-sponsored by the Trace Foundation and Arthub, the exhibition is called “Transcending Tibet” and features 30 newly-commissioned works of art by many of the best-known artists in the field today, including Benchung,Gade, Gonkar Gyatso, Jhamsang, Kesang Lamdark, Losang Gyatso, Nortse, Sonam Dolma Brauen, Tashi Norbuand Tenzing Rigdrol, along with many other important voices. Several of the artists, including Nyima Dhondup,Sodhon, Tenzin Phakmo and Tulku Jamyang, were present to discuss their work with His Holiness.

Art has emerged as an important site for the negotiation of Tibetan identity during this tumultuous phase of Tibetan history. As such, the Gyalwang Karmapa’s viewing of the exhibition stemmed not only from his avid interest in art per se, but also reflected a concern voiced by him in his talks to Tibetan communities across the United States. His Holiness has consistently urged Tibetan audiences to find ways to articulate a Tibetan identity that can be compatible with the identity of the new contexts in which they are living, rather than rigidly preserving old ways.