His Holiness the Gyalwang Karmapa commenced his five-day Autumn Teaching Series this afternoon to a packed hall at Gyuto Monastery in Dharamsala, India. The teachings were entitled How to Generate Conventional Bodhichitta, and His Holiness is following the presentation by Lord Gampopa on the topic in his Precious Ornament of Liberation (Dagpo Thargyen). The Gyalwang Karmapa taught primarily in Tibetan, but often spoke directly in English as well. Translation was provided into English and Chinese for those in the hall, while translation was broadcast live into Polish and Spanish, and Korean and Vietnamese translators also making the teachings available in the hall for speakers of those languages.

An estimated more then 400 monks, nuns and laypeople assembled to receive teachings from the Gyalwang Karmapa, while a far great number were watching a live webcast of the teachings via Internet. The teachings were organized by the Karmapa’s Office of Administration. As cameras were broadcasting the teachings to the many watching form overseas, behind the camera, the office staff were busy working to bring about a perfectly executed event, while the Tsurphu Labrang monks served tea to all, and His Holiness’ own sister graciously moved through the hall ensuring that all was going well.

His Holiness began by commenting that most of those in attendance already had a connection with him, and that this connectedness left him with a sense of gratitude and a strong wish to benefit them. He stated that much as he wished to benefit them, due to what he described as his own shortcomings, he could mainly just make prayers to be able to do so. However, his teachings in the following two and a half hours proved his ability to do far more than simply pray to be of benefit to beings.

With his characteristic ability to bring the Buddha’s teaching into full contact with modern life, the Gyalwang Karmapa cautioned against feeling we lack the ability to attain Buddha’s level of wisdom. We may think, he said, that the Buddha’s royal wealth gave him some special advantage, as if he could contact Apple Computers and have them custom-design a special Mac brain for him, whereas the rest of us had to make do with a Windows XP brain. On the contrary, the difference between our awareness and that of the Buddha, His Holiness said, is that whereas we all share the basic wish to be happy and avoid suffering, the Buddha has fully understood what actually causes suffering and happiness, while we remain mired in confusion as to how to create our own happiness.

The teachings continue tomorrow and through Sunday afternoon. To watch live, visit http://www.karmapa-teachings.org/. 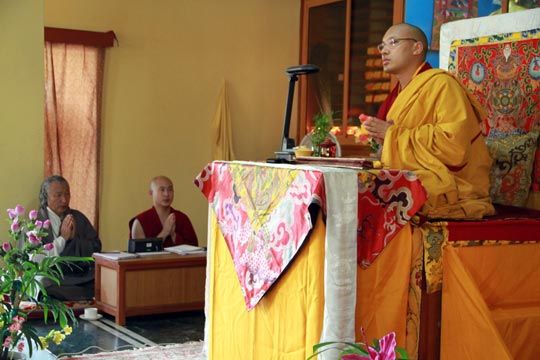 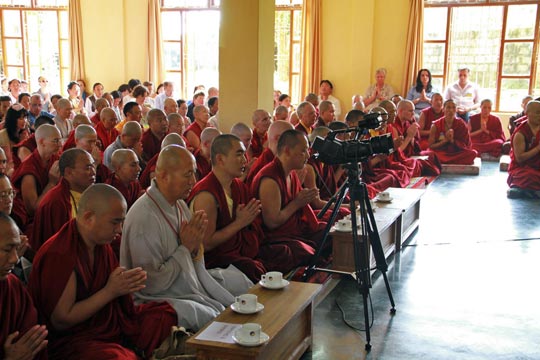 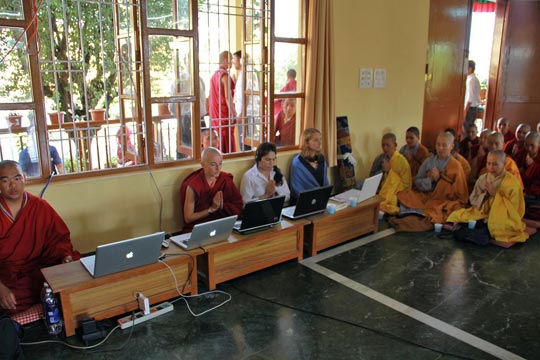 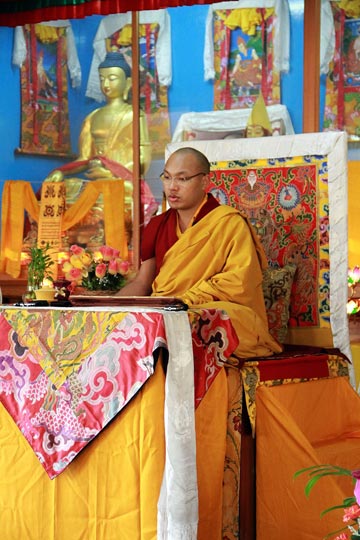 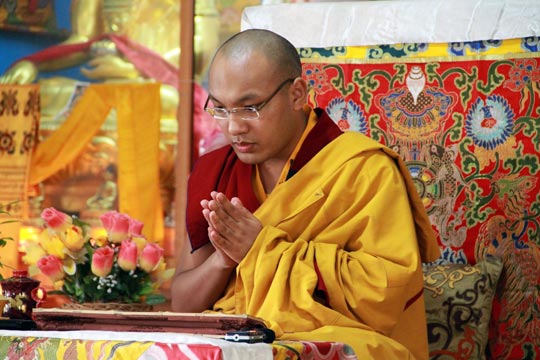