In Teaching for Members of KTD, Karmapa Returns to Basics 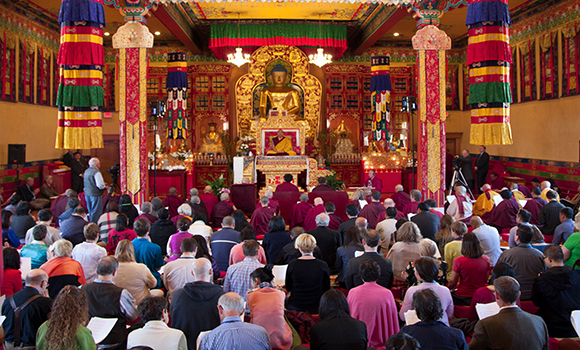 (April 19, 2015 – Woodstock, New York) Long-time members of the KTD community had the opportunity to spend the day with His Holiness the 17th Karmapa in the shrine that is both the heart of their practice community and His Holiness’s own North American seat. The 17th Karmapa taught in the morning and in the afternoon, taking as his topic the four dharmas of Gampopa, which he described as containing the entire teachings of the Buddha.

As explained in the opening address by KTD President Tenzin Chonyi, the KTD community had grown far beyond what the main shrine room could hold. As a result, His Holiness had agreed to offer two separate days of teachings at KTD, to allow all those who have been members of KTD for the past three years or longer to have the opportunity to receive teachings from the Gyalwang Karmapa directly in their Dharma home. In order to share the teachings with all those not present due to space restrictions, the teachings were webcast live with translation into English, Chinese and Spanish.

Reflecting on the situation at the time His Holiness the 16th Karmapa first began traveling to the West, Tenzin Chonyi noted that in the 1970s, other than the occasional university inviting a Buddhist teacher to give a class, interest in the Dharma was highly limited. Since then, there has been a tremendous upsurge of interest in Buddhist teachings in the United States and elsewhere, he observed. That growth is reflected in the fact that no matter how large each center builds its shrine rooms nowadays, the need seems rapidly to overtake capacity.

The mandala offering brought to the fore another contribution to Dharma in the West made by KTD, in the form of its associated three-year retreat center, Karme Ling, where the sixth cohort is currently engaging in the traditional three-year, three-month Karma Kagyu retreat. Led by KTD President Tenzin Chonyi, the retreat masters for the men and women’s retreats along with other retreat lamas from Karme Ling formed an offering procession to commence the events at KTD.

His Holiness the Karmapa began his talk citing a saying of the Drukpa master Drukpa Kunley to the effect that in order to teach the Dharma, either one needed to have flawless Dharma realization, or one needed to be very boastful indeed. He must belong squarely in that second category, since he clearly did not belong to the first, he insisted.

Turning to the topic for the day, the four dharmas of Gampopa, His Holiness began by exploring the textual basis for this teaching. He began by making clear that the presentation of the four dharmas of Gampopa in fact condenses all of the Dharma taught by Buddha without exception, and does so in a way suited to each of the three levels of practitioners. The 17th Karmapa then launched into a scholarly discussion of the source within Gampopa’s own writings for these four dharmas, comparing the positions on this question held by various Karma Kagyu and Drukpa Kagyu masters.

The Karmapa noted that Lord Gampopa carried both the lineage of the Kadampa tradition as well as that of the six dharmas of Naropa and Mahamudra, but was quoted as saying that of the two, it was due to the kindness of the Kadampa tradition that he was able to benefit beings. His Holiness commented that Gampopa taught practices such as Mahamudra and Naropa’s six dharmas, commonly called the six yogas of Naropa, only after he saw that disciples’ minds had been prepared through training in the Kadam teachings of lam rim and so forth.

Taking up the first of the four dharmas of Gampopa, the Karmapa pointed out that this first of the four appears in two variants—the dharma becoming dharma or the mind becoming dharma. Of the two, he would primarily be referring to the first formulation, he said. This first instruction is designed primarily for persons of lesser capacity, generally defined as those motivated by the desire for pleasure in future lives. As such, the primary Dharma teachings referred to in this first of the four dharmas of Gampopa are those on the eight worldly dharmas and those on karmic cause and effect. However, His Holiness said, the category of persons of lesser capacity also includes as a secondary group those who do not have confidence in the existence of past and future lives. The spiritual development of such people can also take place through the practice of this first Dharma.

In the 21st century, His Holiness said, a major impediment preventing the dharma from becoming dharma is the intensely materialistic focus of our lives. The overwhelming sense that our happiness lies in sense pleasures leaves us prey to a great deal of confusion as to where happiness can actually be found. Our obsession with material things and sense pleasures leaves us blind to the real aim, and therefore we cannot see clearly what path we should follow to reach that goal.

For this reason, for those in the beginning stage of the path, His Holiness stated, the real practice consists not so much in contemplating high concepts or meditation topics, but in making a sincere and clear-eyed assessment of their own life. “We should ask ourselves very carefully,” the Karmapa said, “What do I really need? What is the real purpose of my life?”

His Holiness then tackled the question as to how realistic it is to free ourselves entirely of the eight worldly dharmas. Even bodhisattvas, he said, might have some slight presence of worldly motivations in their mind, such as some mundane concern for food. Thus it is difficult to demand of ourselves that all our actions be entirely free of any mundane concerns. However, what would be terribly sad, the Karmapa reflected, is if our practice of Dharma became mixed with eight worldly dharmas. “If we are not able to keep our engagement in Dharma teaching and formal practice free of the eight worldly motivations and concerns, it is highly unlikely we will be able to keep our ordinary activities free of them.”

On that note, His Holiness joked that he would now promote the worldly dharma of seeking food, as it was time for lunch.

Along with Dzogchen Ponlop Rinpoche and Khenpo Karthar Rinpoche, other eminent lamas in attendance today were Zurmang Garwang Rinpoche and Drupthob Rinpoche. They and the entire assembly adjourned for a noonday meal, returning in the early afternoon for the second session of the day.

During the afternoon teaching, the Karmapa moved through the three remaining dharmas, beginning with the dharma becoming the path. This dharma was aimed at both persons of the middle scope and of the higher scope. It was also suited for practitioners of all three vehicles. If the path in question in the phrase “the dharma becoming the path” was the path leading to liberation, then the practice was a common vehicle practice, whereas if it was practiced with the aim of attaining the highest happiness of omniscient buddhahood, it became a practice for a person of the highest capacity, and therefore a Great Vehicle, or Mahayana practice.

In order to practice so that dharma becomes the path to liberation from samsara, His Holiness emphasized the importance of cultivating renunciation, or desire for liberation from samsara. He reflected that some of his Western disciples had commented to him that this was the practice that posed the greatest challenge to them, and stressed that it was paramount to gain an understanding of the distinction between real happiness and that which merely appeared to be happiness, such as intense forms of pleasure, and similarly of the distinction between real suffering and that which merely appears to be suffering.

“Material things are not the problem,” he said. “It is our own craving for them that harms us.”

When the second dharma of Gampopa—that of the dharma becoming the path—refers to the Mahayana path, the cultivation of bodhichitta takes on a paramount role. Some people think that a bodhisattva is just a kind person and that bodhichitta is equivalent to benevolence. This is incorrect, he said, because bodhichitta encompasses not only compassionate benevolence but also profound wisdom.

Since our selfishness is the greatest obstacle in developing impartial love for all, we need the wisdom that recognizes that there is no real difference between self and other, the Karmapa said. He spoke movingly of all beings waiting for us to extricate ourselves from our self-absorption and come to their aid, as if we were their only child and were trapped in prison while they remained unprotected outside, urgently needing us to emerge and come to their aid. It is our selfishness, he said, that keeps us neglecting them, enmeshed as we are in our own selfish interests.

The third dharma of Gampopa—the path dispelling delusion—refers primarily to Vajrayana, he said. “What is meant by delusion here is the subtle habit of dualism,” the Karmapa explained. Since the practice of secret mantra is the only vehicle that finally eliminates the subtle habits of dualism, the two stages of tantra are the main practice for this third dharma of Gampopa. Professing that he was unable to explain these well, and commenting that in any case there was no need to do so, he moved on to the fourth and final Dharma, that of transforming delusion into wisdom.

The fourth dharma of Gampopa refers primarily to the practice of Mahamudra, he observed, and then gave pith instructions for Mahamudra practice, focusing on the inseparability of thoughts and Dharmakaya.

In conclusion, he reflected that the 16th Gyalwang Karmapa had had great plans and great hopes for North America. Although many of those are already “mostly complete,” he expressed his hope to be able to continue working to bring them all to full completion. In order to do so, he uttered his wish to be able to return again and again, frequently, to resounding applause.