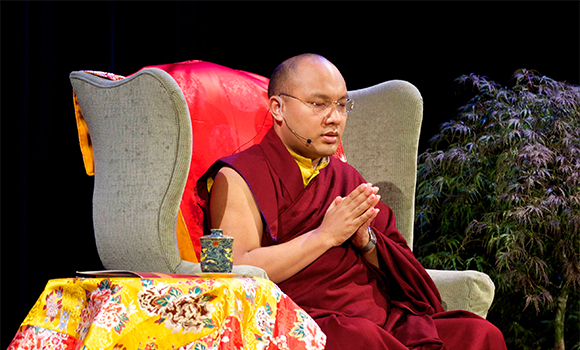 In Kingston, Karmapa Offers Refuge to those Seeking Refuge

Many of the 1,500 attending the afternoon teachings today had been waiting a long time to gather all the causes and conditions to be able to receive the precious refuge vow from His Holiness the Karmapa on their home soil. After a morning session in which His Holiness had given just the sort of teaching needed to prepare their minds to receive the vows, they returned enthusiastically to the auditorium, their much-longed-for opportunity finally at hand.

Before he conferred the refuge vow itself, His Holiness first continued the explanation begun in the morning, drawing a distinction between simply going for refuge, and actually taking the refuge vow. He explained that when we are in a situation of immediate danger we may call upon the Three Jewels to regard us with their compassion as a child might spontaneously call upon its mother. This instance of going for refuge involves a temporary kind of refuge, the Karmapa said, which doesn’t require the commitment of actually taking a vow.

In contrast, the refuge vow implies an actual promise or commitment to take refuge in the Three Jewels for a specific period of time, and it requires us to keep certain rules.

“If you take the vow of refuge based on deep and sincere conviction, then you will automatically or naturally keep its rules or commitments,” the Karmapa said. “You will have a natural enthusiasm for avoiding that which contradicts the vow of refuge and for cultivating that which enhances it. But if you lack such conviction, the commitments may seem an onerous burden,” he advised.

Although he normally gives the refuge vow in Tibetan, His Holiness explained that when there are few Tibetans present he sometimes also gives it in other languages. Since he had not prepared an English version the Karmapa instead chose to offer the refuge vow to the largely English-speaking audience in the original Sanskrit, creating a karmic link between the ancient Indian origins of the Three Jewels of refuge and the contemporary American context from which they were now being approached.

“Giving the refuge vow in Sanskrit has the added benefit that since there are very few people here who speak Sanskrit, if I make any mistakes no one will catch me, and that will make it more comfortable for me!” His Holiness joked, before reciting the vow in precisely articulated Sanskrit.

The real rules of the refuge vow, His Holiness explained next, lie in the questions of how we can protect our commitment of refuge to the Three Jewels, and how we can enhance it. We could divide these into what must be avoided, on the one hand, and what must be practiced or cultivated, on the other.

“Where I think that there can be an overt contradiction to the vow of refuge,” His Holiness said, “is when someone conceives of a yidam deity as some sort of external god to whom they make offerings in order to please them, with the expectation that the yidam, the god, give them whatever they want, no matter what they do or how they behave. People who have that attitude will think, ‘It does not matter what I do; the yidam will fix it and give me whatever I want.’ That attitude contradicts the vow of refuge. The problem is that you are relating to a yidam deity as you would relate to a mundane god, which is unfitting.

“The Buddha’s intention in forbidding taking refuge in mundane gods was that when we do so, we are failing to change ourselves for the better, because we think that the god being worshiped will take care of all our needs. The Buddha’s point was that we need to take authentic refuge by gradually becoming sources of refuge unto ourselves, which requires change and development.”

The message of the second restriction relating to the refuge vow—not to harm other beings—is very clear, the 17th Karmapa said. While we must not harm others or ourselves through our body and speech, we must also not harm them through our apathy.

“Our lack of love or apathy is harmful to other beings because it places them in danger. While apathy, a lack of compassion, in and of itself may not directly harm a being in the sense of actually beating them or hurting them physically, it does harm them indirectly. Therefore we need to widen and deepen our idea about what avoiding harming others really entails.”

Turning to the third restriction, that of avoiding evil companions, the Karmapa pointed out that evil companions are not always outside ourselves. Sometimes our evil companions exist within us and form a part of us, such as when we might have two contradictory attitudes and motivations warring within us.

“I think in a sense it is more important that we take control and observe our own thoughts than it is to worry so much about who our external companions are,” he advised.

The Karmapa ended the day by answering several questions submitted in advance by the audience, on topics including the difference between self-confidence and pride, the role of neurosciences in meditation and how to overcome irrational fears.

In response to a question on whether it is more important to spend many hours on formal practice or on helping others, the Karmapa encouraged us to assess for ourselves whether we feel we are lacking in either of these two aspects, and then put efforts into strengthening our area of weakness.

However, he cautioned, we should not see our practice and our activities to help others as necessarily contradictory.

“If I may use myself as an example, I do not have much time to engage in formal practice and also I am lazy,” he said. “But I do help others—not so much because I have tremendous resolve to do so, but because I have been given the name Karmapa and therefore I must.

“While I am actively helping others, something happens in my mind and I find that I am practicing. It actually improves my mental state and brings experience and realization. So when you actively help others, recognize that this is practice because it improves your mind. However, in order for this to work, it is necessary that you be undistracted, and maintain mindfulness and vigilance while you are helping others.”