In January of 1981, the 16th Gyalwang Karmapa, gave to his heart son, the Xllth Tai Situpa, a sealed protection amulet with a brocade cover, and said, “This is your protection amulet. In the future, it will confer great benefit.” Many years later, the amulet was discovered to contain the prediction letter for the rebirth of His Holiness. 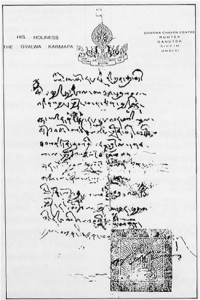 Before the discovery of the letter, and after the 16th Karmapa had passed into parinvirana, one goal was uppermost in the mind of the Karmapa’s disciples: locating his successor, the 17th Karmapa. Since a Karmapa typically provides instructions to a key disciple on how to locate the reincarnation, the years after 1981 were preoccupied with finding the 16th Karmapa’s instructions. However, sometimes the location of such instructions is not so straightforward. Such was the case here.

Typically, protection amulets contain mantras, sacred pills or relics and are left sealed, since they do not contain anything inside which needs to be examined. When the 16th Gyalwang Karmapa had given the 12th Tai Situpa the protection amulet, he had not indicated that anything was inside the amulet needing examination. Situ Rinpoche took the sacred gift and wrapped the brocade around one of the holy instruments he always carried with him. Though he kept it with him day and night for many years as a sacred object from the Karmapa, he never opened it until many years later, after no prediction letter had been found. When HE Situ Rinpoche decided to open the amulet, inside he found the prediction letter!

On March 19th, 1992, the council of the four seat-holders of the Karmapa, Shamar Rinpoche, Situ Rinpoche, Jamgon Kongtrul Rinpoche and Gyaltsap Rinpoche, met to review the letter. The letter was subsequently translated as follows:

The Letter of Prediction
by His Holiness the 16th Gyalwang Karmapa

Emaho.
Self-awareness is always bliss;
The dharmadhatu[1] has no center nor edge.
From here to the north [in] the
east of [the land] of snow
Is a country where divine thunder
spontaneously blazes[2]
[In] a beautiful nomad’s place with
the sign of a cow[3],
The method is Döndrub and the
wisdom is Lolaga[4].
[Born in] the year of the one
used for the earth[5]
[With] the miraculous, far-reaching sound
of the white one[6];
[This] is the one known as Karmapa.

His is sustained by Lord Donyö Drupa;
Being nonsectarian, he pervades all directions;
Not staying close to some and distant from others, he is the protector of all beings:
The sun of the Buddha’s Dharma that benefits others always blazes.

[1]Chos kyi dhying, the expanse of all phenomena and equivalent to sunyata or emptiness.
[2]The Seventeenth Karmapa’s place of birth is Lhathok: “Lha” means divine and “thok” means thunder. In the text, thunder is poetically called “gnam chags” or “sky iron.”
[3]The name of the nomadic community where the Karmapa was born is Bakor; “ba” means “cow,” and the Dharma term for cow, “dodjo,” is used in the text.
[4]Method refers to the father and wisdom to the mother.
[5]His Holiness was born in the Wood Ox year; a tree lives from the earth and an ox is used to plow it.
[6]This refers to the sound of the conch shell that miraculously resounded in the air for about an hour after His Holiness’ birth.
Translated July, 1992 in Rumtek, Sikkim by Michell Martin

The identity of a Karmapa is determined by the prediction of his predecessor.[1] After interpreting the letter of the 16th Karmapa, the council of seatholders interpreted the sentence in the letter stating “from here to the north [in] the east of [the land] of snow” to mean that His Holiness the 16th Karmapa had intended to indicate he would be reborn in Tibet. The council agreed to send a search party to Tibet, led by Jamgon Rinpoche, who was already scheduled to be in Tibet in June.

Next: Prediction of the 16th Karmapa fulfilled
This site uses cookies to ensure that we give you the best experience. Please click "Okay" to accept the recommended cookies before continuing. Okay