“The identity of a Karmapa is not decided by a popular vote or a debate between groups. It is decided only by the prediction of the previous Karmapa.[1] ”

Traditionally, the Karmapa is identified by matching the prophecies of his predecessor to the details of the birth of the candidate for recognition as a Karmapa.

Once the sacred letter of prediction of His Holiness the 16th Karmapa was located in 1992, plans were immediately made to locate the 17th Gyalwang Karmapa according to that prediction.

“To the north in the east of the land of snow”

The 16th Karmapa’s letter of prediction stated that he would be reborn “to the north in the east of the land of snow.” [letter] This was interpreted at the March 1992 meeting of the council of the four seat holders to mean that he would be reborn in eastern Tibet (north of Rumtek). The council decided that H.E. Jamgon Kongtrul Rinpoche III would go to Tibet to oversee the search, as he was already scheduled to be there in June. 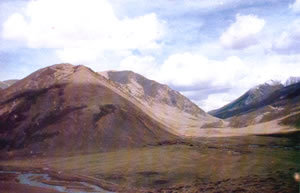 On April 26, 1992, Jamgon Rinpoche tragically passed away in an automobile accident in Sikkim. Rather than allow this to delay the planned search for the Karmapa, Tai Situ Rinpoche and Tsurphu Gyaltsab Rinpoche continued the search initiated by Jamgon Rinpoche. (Shamar Rinpoche was not in Rumtek during the latter half of May, 1992.) They appointed Akong Rinpoche and Sherab Tharchin, as their respective representatives. In May, the two representatives arranged to go to Tibet for the dual purposes of requesting forty-nine days of prayers for Jamgon Kongtrul Rinpoche at various monasteries, and locating the incarnation of the XVllth Karmapa using the previous Karmapa’s instruction letter as a guide.

Before the two representatives arrived in Tibet, information about the sacred testament, along with its interpretation by the council, was sent to Venerable Drupon Dechen Rinpoche at Tsurphu Monastery, the main seat of the Karmapas in Tibet. Drupon Dechen Rinpoche had been at Tsurphu since the 1980’s. In early 1980, when the communist Chinese government opened the Tibet-Nepal border for older Tibetans to visit family and relatives, His Holiness the Sixteenth Gyalwang Karmapa had instructed Drupon Dechen Rinpoche to go back to Tibet to reconstruct the seat.

Tsurphu was requested to dispatch an advance search party who would report their findings to Akong Rinpoche and Sherab Tharchin when they arrived. The officials of Tsurphu Monastery obtained permission from the government to conduct a search. The advance search party was headed by Lama Domo, representing Tsurphu. The members traveled by jeep for about five days through deep snow, heading for the province of Lhotak.

“Where divine thunder spontaneously blazes,
In a beautiful nomad’s place with the sign of a cow.
The method is Döndrub and the wisdom is Lolaga ”

The search party went to the village of Bakor (“ba” is one word for “cow” in Tibetan), near Lhatokgar, in the province of Lhatok (“Lha” means god, or divine, and “thok” means “thunder). Upon arrival, as a ruse, they stated that they had come from India with letters for a “Mr.” Loga. “Was there someone by that name in the village?” They were told that there was a woman in the village by that name. One important detail of the letter was thus confirmed. They inquired about her husband’s name and were told it was Döndrub. They discovered that the couple had a young son, born in the Wood Ox Year, and that his birth had been accompanied by many miraculous signs.

When the search party arrived in Bakor, they found that they had been expected by the eight year old son of Döndrub and Loga. He had for many weeks been planting trees and performing special blessing rituals, preparing to depart soon.