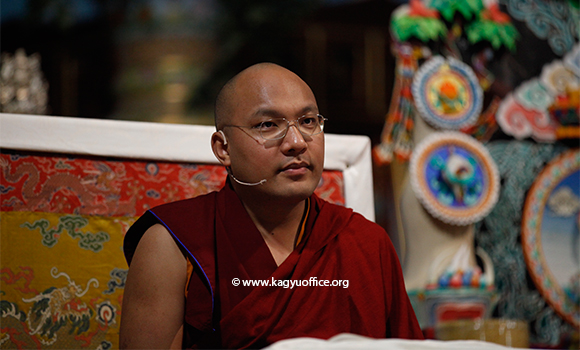 During the Second Arya Kshema Winter Dharma Gathering the Gyalwang Karmapa made the historical announcement that, beginning next year, he would take concrete steps towards restoring nuns’ vows in the Tibetan Buddhist tradition.

Beginning with the restoration of the novice ‘getsulma’ and training ‘shikshamana’ nun’s vows next year, which will be conferred with the assistance of a special contingent of nuns from the Dharmagupta tradition, this will then lay the necessary framework leading to ‘gelongma’ or ‘bhikshuni’ full nun’s vows in the future.

“The biggest event during next year’s Third Arya Kshema Winter Dharma Gathering will be reinstituting the novice and training vows for nuns within the Tibetan tradition,” he said. “This will be a historical event.”

“Many people might think I’m doing this because others want me to,” the Karmapa explained. “But I’m not doing it to placate anyone or in response to anyone. No matter how others see it, I feel this is something necessary. In order to uphold the Buddhist teachings it is necessary to have the fourfold community (fully ordained monks (gelongs), fully ordained nuns (gelongmas), and both male and female lay precept holders). As the Buddha said, the fourfold community are the four pillars of the Buddhist teachings. This is the reason why I’m taking interest in this.”

Inviting the Dharmagupta nuns, who hold bhikshuni ordination, to confer the first two levels of vows to a limited number of nuns in the Tibetan tradition will ensure that their novice and training ordinations are conducted in a proper and complete ceremony from an unbroken lineage. These novice and training vows may then form the basis for future full ordination.

At present within the Tibetan system, which follows the Mulasarvastivada vinaya tradition, there is no lineage for conferring bhikshuni or full nun’s ordination. The invited group of nuns will consist of ten or twenty fully ordained nuns from a nunnery in the Dharmagupta tradition renowned for their careful upholding of the vinaya

During the daily teachings of the Arya Kshema Winter Dharma Gathering, the Gyalwang Karmapa had earlier discussed the issue of nuns’ ordination in some detail. The full comments of his talk follow:

“When the Buddha gave women the opportunity to ordain, he gave them everything they needed in order to practice all the paths and levels in their entirety. There are many people these days who are afraid that it would harm the teachings if women were ordained and in particular if they are given the bhikshuni ordination. But I think there is absolutely no need to have such suspicions, because the Buddha has already allowed it.

“Moreover, because there are no bhikshuni vows we can’t say there are really any proper novice nun vows either. So without any proper novice vows it is difficult to say that there is a true ordained sangha of women who have gone forth. That’s the situation we’re in, and it’s an unfortunate situation for Buddhism in general.

“Over the last ten or twenty years, led by His Holiness the Dalai Lama, many of the masters of Tibetan Buddhism, including many high lamas, geshes, and khenpos, have engaged in discussions with good intentions. There have been many discussions, and people have put great effort into this—I have seen and experienced this for myself.

“We’ve had a lot of talk and research into the words of the Buddha, the treatises by Indian masters, as well as the Tibetan scriptures. It sometimes seems that over the past twenty years we’ve only had talk and research, but we haven’t actually put anything into practice. It’s been like this for a long time.

“However, before you can have such a dual ordination you must first have the proper novice vows and then the nun’s ‘training’ vows, the shikshamana vows. To do this properly will take at least three or four years. Starting next year, we can begin the preparations for a limited number of nuns from each nunnery to begin the process, and provide them all they need. This will begin a process that will then take three or four years. But my hope is that we can begin it next year.”

With this statement the Gyalwang Karmapa announced his intention to ensure that the nuns first received proper novice vows and proper shikshamana ‘training’ vows—a necessary prerequisite to full ordination in the future. It is necessary for nuns to hold and keep these ‘training’ vows without any violation for a prescribed period of time prior to full ordination, usually a couple of years.

After he made this statement in Tibetan during the teachings, the room, which was filled with nuns, monks and laypeople, erupted into spontaneous applause. The Gyalwang Karmapa then paused in his talk for his English interpreter to translate it; upon hearing it for a second time, the gathering erupted into loud applause once more.

When he returned to the topic a few days later, during the Arya Kshema closing ceremony, the Gyalwang Karmapa elaborated further:

“For this to happen, if we begin next year, first of all we need to give the vows of going forth, then the novice or sramaneri vows. Following that are the shikshamana or training vows, which you then need to hold for the next years. Finally, in the fourth year we’ll be able to give the bhikshuni vows. Once we have bhikshunis it will then be another ten years before they will be able to give anyone else the bhikshuni vows. So this will take a long time, and I’ll be in my 40s when we get to the end of the process.

“Now, after I first mentioned this the other day, a very wonderful coincidence happened. In order to give the vows we need to have bhikshunis come to do this. On a particular day recently, when we were doing the Mahakala puja, a group of bhikshunis came to see the puja. I asked them whether they were from a particular Dharmagupta nunnery renowned for strict observance of the vinaya, and they confirmed that they were. So this is a really excellent coincidence, and it is very auspicious that it spontaneously happened. We spoke about my plans, I explained my intentions, and they accepted the invitation. Next year they’ll send ten or twenty bhikshunis to come. This is a really wonderful, unplanned, spontaneous auspicious connection.”

During his earlier comments to the nuns, the Gyalwang Karmapa had emphasised that it would only be for a small, select group who were ready.

“I’m not doing this in order to placate anyone or in response to anyone else, and you should also keep the same thought in mind,” he instructed the nuns. “You should not do it in order to please others or for any such reason. Rather, if you look within yourself and see whether you have pure motivation and are ready to put effort into it, then it is something that will bring meaning to your human life.”