In Praise of Bhikshunis: A Ritual for the Nuns’ Dharma to Flourish 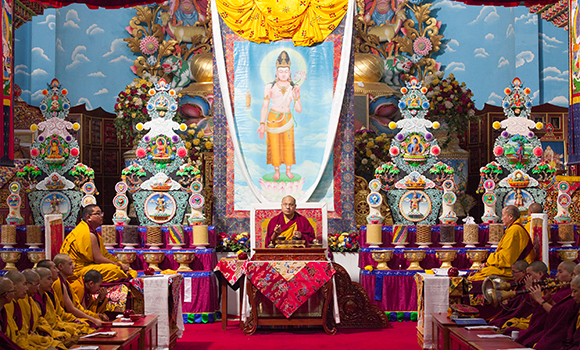 20 January 2015, Tergar Monastery
During the Second Arya Kshema Winter Dharma Gathering, the Gyalwang Karmapa led a special ritual that he himself had composed, making powerful aspirations in support of all female practitioners and particularly for the flourishing of the nuns’ dharma.

Blending his voice with those of the female chantmasters, the Karmapa led the gathering through a recitation drawn from the ‘Sutra of Repaying Kindness, Great Skill in Means’, in praise of the qualities of nine exceptional Bhikshunis who were the direct disciples of the Buddha. “May we have the merit to uphold the teachings properly like the Buddha’s mother, the elder Bhikshuni Mahaprajapati Gautami,” the verse began.

The bhikshunis described in this verse each practiced and attained great accomplishment under the Buddha’s guidance, and all reached the level of Arhat (or ‘Arhantini’, as female Arhats are known in Sanskrit). Therefore, this beautiful verse serves as a powerful inspiration for nuns and female practitioners today, who may look up to these female Arhantinis as outstanding examples.

The three-hour-long ritual has now become a key event during the nuns’ Winter Dharma Gathering. Called ‘A Ritual for Women’s and Especially Nuns’ Dharma to Flourish, Based on the Inseparability of Noble Chenrezig and Noble Ananda’, it was specially composed by the Gyalwang Karmapa before the inaugural Arya Kshema gathering in 2014. It includes the Mahayana Sojong ritual, recitations from the ‘Bhikshunivibhanga’ and other vinaya scriptures, as well as supplications to Ananda and verses of auspiciousness.

At times spontaneously leading the puja, together with the female chantmasters, the Gyalwang Karmapa also led another recitation drawn from the same ‘Sutra of Repaying Kindness, Great Skill in Means’, which relates the story of how Mahaprajapati, the Buddha’s own step-mother, first requested the Buddha to allow women to go forth and ordain. After the Buddha’s initial refusal of her request, his attendant Ananda then interceded and requested the Buddha on their behalf, to which the Buddha finally agreed. It was due to Ananda’s kindness that women were allowed to ordain, the Buddha said, and therefore in the future both Bhikshunis and laywomen should think of Ananda with their whole hearts.

“They should respect him, serve him, call him by name, and continually be grateful to him. They should not forget him in the six periods of day and night, and remember him,” the sutra reads.

It then describes how if a woman takes the Mahayana Sojong precepts with full concentration and diligence on certain auspicious days, it is prophesied that Ananda will protect her and accomplish her wishes through miraculous powers.

The sutra continues that just as in the past Ananda requested the Buddha to allow women to go forth and enter the teachings, it was prophesied that in the future he would be the supreme guardian for all those women who have faith in the dharma.

“May every woman in the world’s physical and mental harms and sufferings be pacified, and may they gain independence and complete powers and abilities,” the sutra says. “May all women who go forth perfect the aggregate of discipline that pleases the Nobles, and complete their study and teaching of the three baskets of scriptures, and their meditation practice of the three trainings.”

During the puja an exquisite thangka of Avalokitesvara was prominently placed above the Gyalwang Karmapa’s throne. Avalokitesvara was depicted in Indian style: standing, clothed in a saffron-colored lower-garment, with the Bhikshu Ananda emanating from his open right-hand palm and resting in space. The image was a beautiful visual illustration of the inseparability of Avalokitesvara—the Buddha of compassion—and Ananda.

Jamgon Kongtrul Rinpoche and Gyaltsab Rinpoche also took part, seated on thrones to the Gyalwang Karmapa’s right and left, heading the first two rows of nuns. Throughout the puja, the gathering of nuns, monks and laypeople united in their aspirations for the nuns’ dharma to prosper, with supplications specifically for dispelling obstacles and unfavorable conditions as well as for protection.