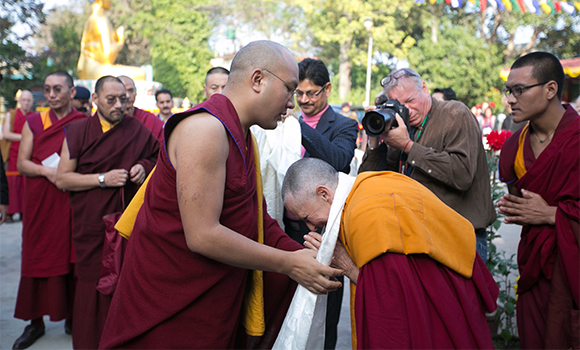 In what has become an annual tradition during his winter activities in Bodhgaya, the Gyalwang Karmapa returned once more to Root Institute to teach for an afternoon.

This year, in his seventh such visit to the institute, he offered a profound and inspiring talk on impermanence. Root Institute is part of the FPMT organization (Foundation for the Preservation of the Mahayana Tradition), and is a centre which particularly attracts many international dharma students.

An hour before the Gyalwang Karmapa’s arrival at the centre, the institute was blessed by the auspicious arrival of a rescued elephant, whose upkeep and ongoing care are sponsored by the institute’s Spiritual Director, Lama Zopa Rinpoche. The elephant, a female named Ragnini, arrived adorned in elaborate silk brocade, with intricate painted patterns and a headpiece of glittering silver jewels, ready to welcome the Gyalwang Karmapa in grand style.

The atmosphere inside the main shrine room was peaceful and intimate as the waiting crowd calmly found their places. As they waited a slow chant of Karmapa Khyenno began inside the room, while outside the pathway was lined with young children and staff from both the Maitreya School and the Tara Children’s Home for local HIV orphans. The children waited happily, ready to escort the Gyalwang Karmapa into the shrine room with their sweet and angelic chants of Om Mani Padme Hum.

When he entered the shrine room the Gyalwang Karmapa first paused for a moment behind the teaching throne to offer long, white silk khatas before the golden statues of Buddha Shakyamuni and other Gelug masters. Once seated, he then received a mandala offering from the senior managing staff of Root Institute.

The Gyalwang Karmapa began by commenting that though he had been asked to teach on a particular verse from the Diamond-Cutter Sutra, as this verse really related to impermanence he would instead teach more broadly on the topic.

“Impermanence is a situation we can see every day. But just seeing and hearing about impermanence isn’t enough – we need to really incorporate it into our beings,” he began.

“If someone were to say to us, ‘you only have one hour left in your life’, what are we going to do in that one hour? We spend most of our time in a lot of busyness and distraction and put off the things that are most important to do. We aren’t really aware of what it is that we actually need to accomplish. But if we think to ourselves, ‘I’ve only got an hour left’, we’re immediately going to remember exactly what is most important to do.”

“Meditating upon death and impermanence inspires us to feel like we need to seize the opportunity of this life. We need to use and value it. This is an opportunity that we’ll not get again.”

He reminded those gathered that because everything is impermanent, we have the opportunity to change in every second, every minute, and every hour.

“If things weren’t impermanent then the old situation would just continue and there would be no chance for change. But because things are impermanent we are able to improve. Impermanence gives us room for hope.”

He then drew an analogy of how we can think about impermanence as being like music.

“Music is always changing from moment to moment – sometimes the melody goes up, sometimes it goes down, sometimes it gets louder or sometimes softer. Changes are happening all the time. If there were no changes it would always be the same, and then the music would just be a monotone. But because it’s impermanent the pitch can change and we can have beautiful melodies that rise and fall.

The Gyalwang Karmapa reminded the gathering that even if we make mistakes, impermanence makes it possible for us to learn from those mistakes and still go on to greatness.

“We should recognize everyone is able to change,” he said. “It’s like Milarepa. In the first part of his life he did terrible deeds and killed many people. Yet in the second part of his life he practiced hard and achieved great accomplishment. We have the same opportunity. We need to recognize that we have this opportunity and take ownership of it. It’s important to strive hard to use our opportunity.”

“You aren’t born a great person – it’s because of the great difficulties and suffering that you face that you then are able to become a great person. Whether or not someone becomes a great being depends upon how they deal with the difficulties that arise. We should not consider difficulties to be our enemies, but rather our friends. If we do that we can use them to improve ourselves.”

As the teaching session wound to a close, the Gyalwang Karmapa expressed his appreciation for the many different social service projects being undertaken at Root Institute, and offered his encouragement and support that they continue. He thanked the organizers for inviting him, and said that he hoped to be able to return again in future years.

After leaving the shrine room he then made his way outside, escorted by the long-term director of Root Institute, Venerable Labdron, and headed directly over to where Ragnini the elephant stood patiently waiting. The Gyalwang Karmapa spent five minutes gently hand-feeding her fresh bananas—with palpable joy evident from both sides.

Finally the Gyalwang Karmapa stood for a minute before the institute’s recently repaired Nagarjuna statue, which he had been specially requested to re-consecrate. He offered handfuls of flower petals while reciting a prayer by Nagarjuna, before continuing on his way back to Tergar Monastery.