On October 31, 2006, His Holiness left Gyuto Tantric University with Gyaltsab Rinpoche and his entourage, first traveling to Chandigarh for a lunch with a government official, AGDP Joti. After an brief stay in Delhi, His Holiness on November 2nd flew to Bagdogra Airport in Siliguri, West Bengal, en route to Bokar Ngedon Chokhorling Monastery, where he is presiding over the third parinirvana anniversary ceremonies for the late Very Venerable Bokar Rinpoche. Numerous government, monastic and lay officials and representatives, as well as some 1,000 disciples, received His Holiness at the Bagdogra airport. 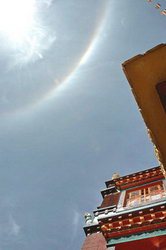 On the morning of November 8, 2006, at Bokar Monastery, hundreds of international students gathered to listen to His Holiness Karmapa give teachings on the essential points of Guru Yoga and Mahamudra. Simultaneously, outside the teachings hall, a large rainbow appeared above the mid-morning sun.

On Friday, November 10, 2006, Bokar Ngedon Choekhar Ling held Cheme Phagme Nyingthig Long Life prayers for His Holiness Karmapa in the main hall. Khenpo Donyo Rinpoche gave a teaching on the Namthar, the life story, of the great Master Bokar Rinpoche to the international sangha. His Holiness continued to preside over the consecration ceremonies for Bokar Rinpoche’s Stupa with a Kalachakra puja.

On Monday November 13, 2006, His Holiness Gyalwa Karmapa received Mandala Offerings from Bokar Ngedon Choekor Ling. The procession of offerings included a mandala of precious substances, sacred texts, robes, numerous statues of the Buddhas, offering bowls and vases, and Tsok (sacral feast offering). Both the monastic and the lay sangha gathered to celebrate the offerings made to His Holiness, including Gyaltsab Rinpoche, Payu Tulku Rinpoche, Drupon Rinpoche, as well as monks from various monasteries who arrived earlier to pray during the four day consecration ceremony for Bokar Rinpoche’s stupa. In the afternoon, His Holiness met with the international students to share personal stories of the Venerable Kyabje Bokar Rinpoche.

Concluding his trip this year to Bokar Monastery in Mirik, His Holiness Karmapa gave Refuge Vows and offered the Green Tara Empowerment to the International sangha on the morning of November 14, 2006. On November 15, 2006, the Rumtek lay sangha arrived and gathered before His Holiness as he spoke of his aspirations for Rumtek, providing much spiritual support and inspiration to the residents. He conferred the Long Life Empowerment to the group in the morning and in the afternoon sat beside His Eminence Gyaltsab Rinpoche, Bhayu Rinpoche and Khenpo Donyo Rinpoche to watch members of the Rumtek community perform a traditional opera, including Sikkimese and Bhutanese dances. – Tashi Paljor More . . .