His Holiness Spends his First Day on Redlands Campus 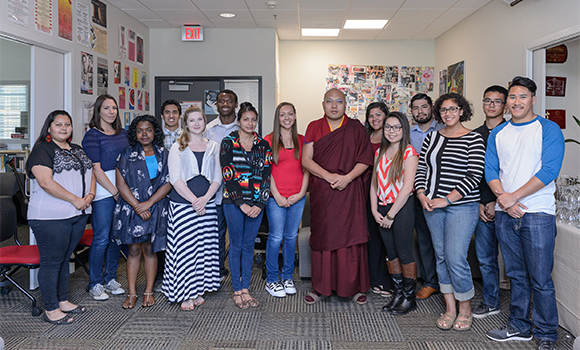 (March 23, 2015 – Redlands, California) As many a new student had done before him, His Holiness the Karmapa set out today for his first day of college classes, armed with a notebook and pen emblazoned with the name of the university on it. Like any other student at a private liberal arts college, His Holiness was signed up to take classes in various disciplines across the humanities—theatre arts and religious studies on his first day, music on his second.

Most students, however, are not greeted by the president of the university as they take their first step on campus. Most freshmen in their very first class at college do not hear their classmates discuss a play they themselves have written. Nor does the university fly on its campus flagpole a flag associated with their lineage. Very certainly, most incoming students are not about to be granted an honorary doctorate on their second day of class.

Such was the not-so-typical first day of school for the 17th Karmapa today, as he enjoyed his very first university classroom experience. (Although His Holiness had interacted with students last week at Stanford University, his first visit to an American university, he did not sit in in any formal classes.)

At the University of Redlands, His Holiness the Karmapa was greeted at the foot of the steps to the administration building by President Ralph Kuncl, who then hosted him for tea in his office.

“The University of Redlands has an 108-year history,” the President told him, “and you are now part of that history—an important part.” President Kuncl was intrigued to hear that 108 is considered the most auspicious number in Buddhist culture.

The President then escorted the 17th Karmapa to his first class: Religious Studies 292 – Sacred Life Stories in Asian Religions. The class was taught by Professor Karen Derris, the professor who had previously brought two student groups to India to study with His Holiness in his monastery and later co-edited the book that resulted from those teachings: The Heart Is Noble: Changing the World from the Inside Out.

The opportunity to sit in on a religious studies class at a small liberal arts college allowed His Holiness the Karmapa to observe how the study of religion—and Buddhist studies more particularly—is conducted in an academic setting in North America. The topic of that day’s class was the lives of the women appearing in the life stories of Milarepa, and the role of community in women’s lives, with comparison to the Therigatha collection of verses of the first bhikshunis. The students had read both the standard biography of Milarepa by Tsangnyon Heruka and the script of the play composed by His Holiness the Karmapa himself, and viewed clips from a video of the production as well.

Professor Derris asked the students to compare the treatment of female characters in both works. Several observed that in the play Milarepa’s mother emerged as a more human character and less a plot device to get Milarepa on the path to Marpa. Only when reading the play, several students commented, were they able to imagine the emotions and see her as a mother desperate to protect her children. The professor then guided the class through an exploration of the impact of a supportive community on the lives of the various women characters, and in that context the class then considered His Holiness the Karmapa’s own initiative to establish full ordination for women in his lineage.

Asked what they had learned about their own lives from reading the life of Milarepa, one law student commented that after observing how Marpa had guided Milarepa, he felt that he needed to completely reassess his concepts of punishment and rehabilitation. Another commented that thinking in terms of relationship that carry from one life to the next made her think more deeply about forgiveness and impermanence in her own experience.

His Holiness then took a group photo at the request of the students, and headed to his next class, in the Theatre Arts Building where the bright southern Californian sun illuminated the Tibetan prayer flags hung in honor of his visit. This class was an advanced theatre class, as was more than fitting for someone who had already written and overseen the production of a six-act play in Bodhgaya. Although the 17th Karmapa had staged an elaborate production of the life of Milarepa at the age of 25, he had done so with no formal training or guidance. As such, the exposure to a structured process with extensive tools to aide in the production process proved an engaging class indeed. Both Nephelie Andonyadis, professor of theatre arts and Trevor Norton, director of production, led His Holiness the Karmapa through the stages that theatre students take in designing a play, from computer-aided design tools to the costume shop, and from set design to lighting.

After this second class of the day, it was time for lunch. However, no crowded dining hall awaited His Holiness the Karmapa, for the university had prepared a leisurely hilltop picnic for their guest and his full entourage. Although most of the students who had traveled to India to study with the 17th Karmapa had already graduated and scattered across the continent, nearly all of them had come back especially for his visit. This picnic celebrated their reunion with their teacher.

During the picnic, students had the opportunity to sit with His Holiness, share a meal and make an offering of music. Two of the students who had attended the course that yielded The Heart Is Noble were now engaged to marry, and presented His Holiness with an invitation to their wedding. As was expressed at the picnic by Kelly Hankin, director of the University of Redlands Johnston Center for Integrative Studies that had provided primary support for the courses in India, the gathering was not only a reunion but a renewal of the warm bonds between them.

After the Karmapa had hosted them so warmly in his monastery, the students were eager for the chance to welcome His Holiness and show him their home, and led him on a tour of their campus. First the students introduced His Holiness and his sister to the Redlands mascot, a bulldog named Thurber, and then showed him around a typical dorm and dining hall. When the campus tour led them to a computer lab, the students presented the Karmapa with his own student ID and password, and he logged in at an available workstation.

The tour meandered across campus to the fully sustainable, earth-sheltered environmental sciences building, where His Holiness tested terrain-modeling and other technologies. A visit followed to the university’s SURF garden, where students practice sustainable agriculture to supply both the university dining hall and local communities.

The next stop on the tour led His Holiness the Karmapa to the campus labyrinth, where the University Chaplain John Walsh welcomed him to plant a tree that University of Redlands was designating in his honor.

For his final stop of the day, His Holiness the Karmapa stopped at Bekins Hall, home to the Johnston Center living-learning community of which many of the students who had visited him in India had been members. All the residents of the hall awaited him on the lawn in front of their residence, and took one last joyful photograph with His Holiness before rather unusual day one at university was declared successfully completed.