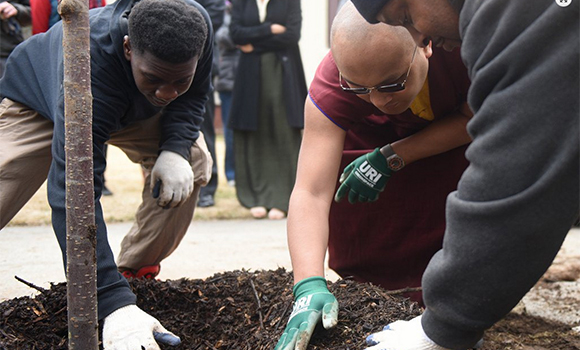 (April 8, 2015 – New Haven, Connecticut) His Holiness the 17th Karmapa put on gloves, hefted a shovel and planted trees on the streets of New Haven, lending his own efforts to the nation’s growing urban ecology movement. His Holiness this morning joined a group of men rebuilding their lives after serving prison sentences, sharing with them the task of bringing new life to the streets of the city. The activity formed part of Yale’s Urban Resources Initiative (URI), which employs ex-convicts and urban teenagers to work on environmental projects across the city. As such, the program supports two major aims dear to His Holiness the Karmapa: environmental protection and social justice.

In his talks to university students across America, the Karmapa has been advocating greater awareness of our deep connectedness to one another and to the planet, and more fully assuming the responsibility that those connections imply. He has also been emphasizing that our sense of responsibility must manifest in direct action. Today he vividly demonstrated his commitment to those principles.

Although His Holiness the Karmapa conversed with the ex-convicts as he was introduced to them one-by-one and later as they worked side-by-side, he gave no general talk. Rather, his teaching this morning was wordless, as he extended his hand in friendship, hauled buckets of water and shoveled compost shoulder-to-shoulder with men whose life experience differed so greatly from his own.

Bill Burch, a founding pioneer of the urban ecology movement, had flown back from the Andes to host His Holiness the Karmapa during his activities in New Haven. As he spoke to His Holiness the Karmapa of the work that is being done in the area of urban ecology and community forestry, Bill Burch said to the Karmapa, “Our work here is fulfilling your vision.” During his Chubb lecture one day earlier, His Holiness had stressed the importance of acknowledging and cultivating our sense of closeness to the natural environment and to one another.

A long-time activist, Bill Burch recounted to the Karmapa how he had returned from the Himalayas where he had been overseeing a community forestry program that combined community building and ecological conservation and was asked to do something similar in an urban setting in the United States. He began implementing community forestry initiatives in urban settings, laying the groundwork for his urban ecological activism and the later creation of URI at Yale. Colleen Murphy-Dunning, program director at the Hixon Center for Urban Ecology at the Urban Resources Initiative (URI), was also on hand to present the URI initiatives to the Karmapa as he visited its sites in the morning.

Among URI’s various programs, the Greenskills program that His Holiness the Karmapa joined trains community members, ranging from urban youth to ex-convicts, in ecological skills, including tree-planting. With links to various institutions, URI illustrates just how mature the urban ecology movement has become in the United States. Housed at Yale University and involving Yale students as volunteers, URI also partners with the City of New Haven. The Greenskills program began in 2007, partly in response to a backlog of requests by residents of the city for street trees. Through URI, New Haven homeowners can submit requests for the city to plant trees on their property, and URI then deploys its teams to complete the work orders. His Holiness the Karmapa joined the team as it was assigned to fulfill one such petition.

As His Holiness the Karmapa and the rest of the crew toiled in front of a house to plant a tree, the owner of the property stood on her front lawn, watching the work crew plant new life in her front yard. Tears streamed down her cheeks as she offered the Karmapa a bouquet of tulips, and sought to express in words her joy and amazement at her good fortune to have His Holiness blessing her home and her family by planting trees on her property.

When the tree stood firm in the ground, the men requested a photo with His Holiness. They shared a final moment together, posing for the camera, and then shook hands one last time, their joint labor complete for the moment. The Karmapa departed to tour the East Rock area of New Haven, leaving to nature the task of strengthening the roots of what had been planted, and watered and nourished together that day.