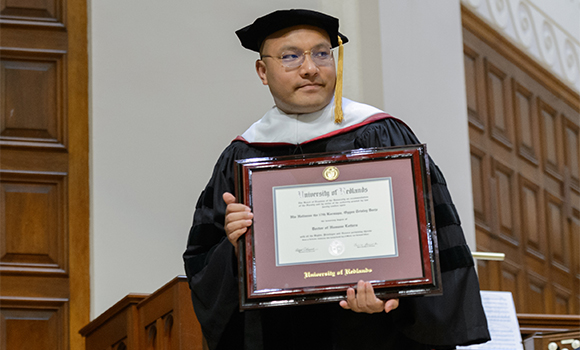 (March 24, 2015 – Redlands, California) As part of its ceremony to confer an honorary doctorate degree on His Holiness the 17th Karmapa, the University of Redlands issued a formal proclamation. Professor Karen Derris, who had first brought students from the university to India to study with the 17th Karmapa, read the proclamation at the podium immediately prior to the formal granting of the degree. The text in full follows here:

The University of Redlands, with great respect and deep appreciation, commends and honors His Holiness the 17th Gyalwang Karmapa, Ogyen Trinley Dorje, this 24th day of March, 2015.

We commend His Holiness for his leadership in working with his generational peers to transform our world through education dedicated to broadening awareness of suffering in the world and to informing compassionate action to alleviate it.

We celebrate the Gyalwang Karmapa’s deep commitment to illuminating and building upon the interconnections that unite the world across differences of language, culture, religion or worldview.

We honor the Karmapa’s special relationship with our students, which began at his home in India where he most generously guided them in deeply meaningful cross-cultural conversations. His Holiness now guides liberal arts institutions toward a model of global learning that encourages students to embrace their responsibilities as global citizens as opportunities for forming global friendships.

Serving as an inspiration to millions around the world in their daily lives, His Holiness’s educational efforts have led to meaningful progress toward environmental sustainability, gender equality and humane treatment of animals in the communities of his Buddhist faith, inspiring others around the globe to work for meaningful change in their own communities.

Through the example of his remarkable life story, the Karmapa shows us the endless possibilities arising from courage, service to others and unwavering aspiration to achieve the conditions for freedom and happiness for all beings in the world.

For this and more, the University of Redlands and its Board of Trustees convey our deepest respect and gratitude for His Holiness’s exemplary life and work, and we confer upon him the honorary degree of Doctor of Humane Letters, with all rights, privileges and responsibilities pertaining thereto.