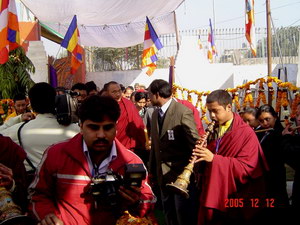 On December 12, 2005, His Holiness Karmapa visited the Tibetan Settlement at Majnukatila in Delhi. At the request of the Tibetan Welfare Office, His Holiness performed special prayers in response to the recent bombing incident in Delhi and the October 8th earthquake which caused such destruction in Pakistan and the Indian side of Kashmir. His Holiness prayed for blessings for those who passed away, for comfort for the injured, and for the good fortune that similar natural and man-made calamities never occur again on this world, the home of sentient beings.

Mr. Lhakpa Tsering of the Tibetan Welfare Officer offered a traditional welcoming khata to His Holiness and with Mr. Phuntsok, the leader of the Tibetan Camp, offered a mandala and ceremonial rice and tea to His Holiness and the attendees. His Holiness led the assembly in special prayers and dedicated the blessing of the prayer gathering specifically to the victims of recent earthquake and Delhi bombing incident. His Holiness also gave advice to the gathering and the transmitted the oral authorization to practice Chenrezig, the supreme embodiment of compassionate activity.

His Holiness’s visit to Majnukatila is part of his 2005 – 2006 Winter tour (click here for schedule). – Karma Woser Rapten