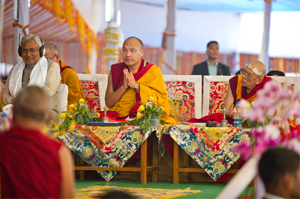 As many as 300,000 had pilgrims gathered in the village of Bodhgaya for the Kalachakra for World Peace ceremonies. Thousands of Buddhists from across the Himalayan region joined Tibetans coming directly from Tibet itself in what was the most important public religious ceremony in years for the vast community of followers of Tibetan Buddhism in India and around the world.

The first public audience granted by the Gyalwang Karmapa drew over 8,000 newly arrived Tibetans. The Gyalwang Karmapa delivered a rousing hour-long address to the crowd, urging Tibetans within Tibet to unite and to seek out skillful means to preserve Tibetan culture. On the following day, His Holiness the Karmapa received a group of over 10,000 devotees from across the Himalayas, and on subsequent days, received Tibetans living in India, and Indians from across the nation as well as international disciples.

Among the many disciples from overseas on hand to attend the Kalachakra initiation was Richard Gere, who had a private audience with the Gyalwang Karmapa on November 9.

During his stay in Bodhgaya, His Holiness the Karmapa further participated in a non-sectarian (rime) prayer gathering, along with His Holiness Sakya Trizin, had of the Sakya school of Tibetan Buddhism, and the Ganden Tripa, formal head of the Gelugpa school, and presided over by His Holiness the Dalai Lama.