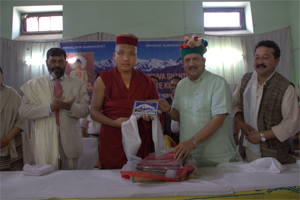 Kalon Gyari Dolma briefed the gathering on the ongoing critical situation inside Tibet and appealed for continued support from the delegates for the Tibetan cause.

The RSS leader Indresh Kumar said Tibet was never a part of China and denounced the ongoing violation of basic human rights inside Tibet.

His Holiness Gyalwang Karmpa, in his address noted the same culture that Tibetans and Indians in the Himalayan regions have historically shared.

“Both Indian Himalayans and Tibetans are part of the great Himalayas and historically we have shared a good relationship,” Karmapa said.

“Since Tibet lost its independence, the Dalai Lama and along with him many Tibetan took refuge here in the Himalayan state of Himachal Pradesh, which has kindly hosted exile Tibetan administration and been the second home for many Tibetans and also become a platform where we preserve our culture and tradition, i hope this deep and holy relationship lasts for centuries to come ” Gyalwang Karmapa said while acknowledging the hospitality of the state.

The Himalaya Pariwar is a regional grassroot organisation aimed at helping the people in the Himalayan Region to overcome the challenges of communalism, regionalism, poverty and unemployment.