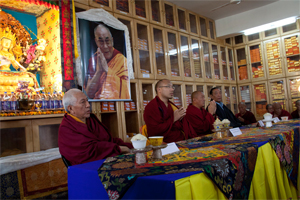 At a special ceremony this morning, the 17th Karmapa Ogyen Trinley Dorje officially opened Gyuto Monastery’s new library and presented certificates to four monks who had successfully completed their studies for the degree of Geshe Ngakrampa.

In a short address, Gyalwang Karmapa referred back to comments His Holiness the Dalai Lama had made during the recent Kalachakra teachings in Bodhgaya. The Dalai Lama had chided his followers for always asking him to give Buddhist teachings but never taking the initiative themselves to study the Buddha’s teachings directly from the old books of the Tibetan Buddhist canon (the Kangyur and Tengyur), which sat gathering dust on the shelves of Tibetan libraries. Surveying the newly-finished library, the Karmapa wryly admitted that he too sometimes shared this view.

After the conclusion of the ceremony, Gyuto Monastery offered all the guests a specially prepared lunch.