Geshe Potowa’s Soliloquy Session Three: Now Is the Time to Practice and How We Avoid It 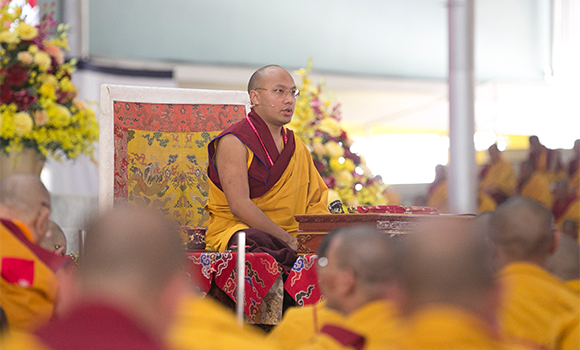 18 February, 2016 -The Pavilion, Bodh Gaya, India
Recapitulating the essential message of the previous days, the Gyalwang Karmapa began his talk emphasizing the importance of recalling impermanence and death. Doing so, he said, allows us not to be attached to the things of this life and mired in thoughts about it. He then continued reading from Potowa’s text:

You do not know when you will die, so resolve not to procrastinate about practicing the Dharma. Nothing else will help at the time of death, so be determined that you will not have attachment for anything.

To illustrate what this might feel like, Potowa gives the example of a person being led to their execution. If along the way stunning jewels and gold were spread out before them, what interest would they have? We alone will face death, and knowing this, we should not be attached, for example, to friends. If we have them it is fine and if not, that is fine, too. The same applies to being wealthy. Whatever arises, our mind is joyful, and we simply allow whatever happens to happen.

Turning to the topic of spreading the Dharma, the Karmapa noted that we are all Dharma practitioners, and knowing the benefits of the Dharma, we should encourage others to enter the Dharma as well. It would be strange if we advised them instead to engage in worldly pursuits. In general, the Karmapa said, teachers should explain the Dharma in harmony with the inclinations and thoughts of others. The Karmapa cautioned, however, that this does not mean understanding someone’s character and then saying what pleases them. Actually, the Karmapa explained, one has to say something weighty that others might not want to hear: They must turn their mind away from this life, because attachment to it is not a path to freedom or true happiness. If we want to practice real Dharma, we must turn our backs on whatever we are attached to.

The signs of not giving up attachment to this life, the Karmapa noted, are, for example, people giving advice to sponsors and talking of benefitting the teachings when they themselves are involved in negative actions; people studying so they become famous; or those who should be spending their time in practice saying that now is the time to engage in activity, so they give empowerments and explanations and collect followers.

Those who are still attached to this life, also say that now is not the time to practice. “We are ordinary people,” they say, “How could we practice the Dharma the way it is taught?” The Karmapa remarked that such people think that all they can do is make aspirations, wish that something will happen, and hope that things go well. However, he noted, now that they have the good fortune to have attained a precious human rebirth and still say they cannot practice, then when could they?

If Dharma won’t arise in your being now, it will be even less likely to arise if you are born a dog in your next life. It is less likely still if you are reborn as an ox, donkey, animal, or in another of the eight states that lack leisure. Even now, you cannot get your mind to do anything if your body is even slightly indisposed. So I think there is no better time than now to practice the Dharma.

If we are just slightly uncomfortable, the Karmapa said, our minds do not function and we cannot focus our thoughts. In the future, if we are reborn as an animal, how could we possibly develop the Dharma within? So the best time to practice is now. Saying “I’ll practice in the future” is a fool’s talk. The Kadampa masters of the past said that if we are going to practice Dharma, that very practice begins today. Some think, “I’ll have a good time now and then practice when I’m old.” “This will not work,” the Karmapa confirmed, “as our practice begins on this very seat.”

He continued reading from Potowa’s text, which starts with the thoughts of people who think authentic practice is not possible: “It is always difficult to be an accomplished master or perfect. Now we must go on our aspirations.” Potowa then explained, “Mara” does not mean some external, dark, and grotesque being. It means the inability to develop higher qualities and positive thoughts despite your own good intentions and good companions.”

People who do not recall death and are attached to this life, the Karmapa continued, also say “the real teachings have become degraded, so even if we practice, we will not get the result of awakening. These people are fantasizing something like a Golden Age of Dharma in the past, like the time of Marpa, Milarepa, and Gampopa.” Thus, in addition to not practicing themselves, the Karmapa explained, such individuals are discouraging others from practice by telling them they do not have the possibility of achieving results. Such a statement is a sign that these people do not know the actual situation of how things really are.

The Karmapa then looked at this situation through the lens of logic. The statement “This is not the time of authentic Dharma,” and the statement, “This is a time when you can make aspiration prayers” contradict each other. Why so? Practicing utterly pure Dharma means that you make aspiration prayers from the bottom of your heart for the sake of all living beings. There is no more profound or vast Dharma than this.

The protector Maitreya taught that bodhichitta is the wish to attain full awakening for the benefit of others. (There are debates about whether bodhichitta is a primary mind or a mental factor, the Karmapa noted, but if mental factors do not accompany a primary mind, then it cannot do much, can it?) In brief, he said, “Precious bodhichitta arises as an aspiration, and how could there be anything superior to this wish?” Therefore, he explained, saying “this is not a time when we can practice real Dharma,” and also saying “it is a time when we can only make aspirations” is a sign of not knowing the Dharma well.

When people say, “This is a time for aspirations only,” what they are really saying is that there is no need to turn their mind from this life, no need to examine their attachments. In logical terms, it is equivalent to saying that turning your mind away from this life is not found among knowable phenomena. To explain this, the Karmapa looked at two categories that include all living beings: ordinary beings and noble ones. Someone who turns away from this life would have to belong to one of these two.

Concerning the first category of ordinary individuals, it was stated that they cannot turn their minds away from this life because of attachment. Concerning the second category, the noble ones, they have already liberated themselves from the three realms and have no attachment for this life; there is no need for them to turn their minds away from this life again. Therefore, the Karmapa concluded, there is no basis for the statement “turning away from this life,” since it would have to apply to ordinary individuals or to noble ones (two categories that include all living beings). Since turning away from this life applies to neither, it would be impossible for anyone to do this. With this line of argument, the Karmapa showed the logical absurdity of the statement, “This is a time for aspirations only.”

The Karmapa mentioned that quite a few people have said to him that given how things are in the world these days, no one, or almost no one, is practicing authentic Dharma, and those who seem to be practicing are all fakes. So these people say, “How could we practice pure Dharma?” This is a sure sign that they have not practiced themselves: they have not recalled death nor seen how attached their minds are. What they are doing instead is projecting their own limitations, their own negative character, onto others and saying that other people are not practicing.

The people who talk like this are actually Maras, the Karmapa explained, because Mara is not a dark person with horns in a pitch black room and wearing dark clothes, but someone who obstructs us from engaging in virtuous actions or increasing them. Mara can also be understood, he said, as something in our own mind stream that prevents us from acting in positive ways and increasing our qualities.

The Karmapa continued reading from the text and summarized, “If you do not recall death, there is nothing to be done.” Potowa states, “If you want to practice Dharma from the depths of your heart, there is no way not to recall impermanence.” If you practice Dharma without recalling death,” the Karmapa observed, “from the outside it may seem you are practicing Dharma, but actually you are not.” Potowa writes:

All the difficult austerities, such as mountain retreats, sealed retreats, living on alms or in solitude, eating only once per day, and so forth, which you go through, will simply contribute to merit generated for this life, how much people will respect you, how much gain and fame will come, and your ambitions for this life. None of these will become Dharma.

The Karmapa commented that without remembering death, all these hardships are a mere similitude of Dharma, performed to impress others; such people only seem to be Dharma practitioners. This becomes evident when they meet with difficult situations, the Karmapa noted; if there is no need to practice patience, they can do it, but when a difficult situation comes up and they need to be patient, they lose it. The last sentence of Potowa’s text for today summarized his message: “Dharma cannot become the path if you do not remember death.