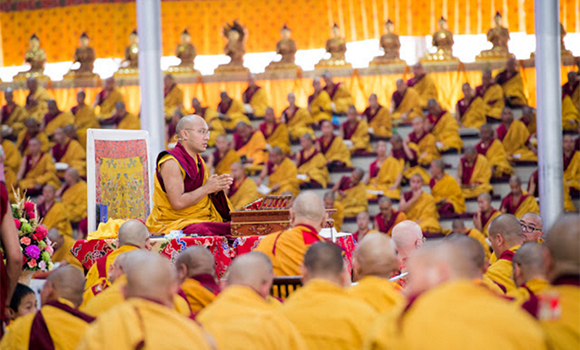 17 February, 2016 -Monlam Pavillion, Bodhgaya
The tradition of the Dagpo Kagyu is the confluence of two great streams: the practice of Mahamudra from Milarepa and the Six Yogas of Naropa, and the mind training tradition received from Jowo Atisha and transmitted through the Kadampa masters. Both streams were united in Lord Gampopa. Mind training is the necessary foundation for the practice of Mahamudra, the Karmapa explained, which is why he chose to teach from the Kadampa masters as much as possible during the main Monlam. This year’s text—also called The Long Soliloquy of Mind Training—was too long to be taught in one year, so he would continue the teaching at next year’s Monlam.

Geshe Potowa Rinchen Sal spent seven years serving Dromtönpa, the principal student of Atisha and founder of the Kadampa tradition, and received the oral instructions for mind training from him during this time. Later, Geshe Potowa was appointed the abbot of Dromtönpa’s monastery, Reting, in the Reting Tsampo Valley north of Lhasa. This position gave him a great opportunity for developing influence and personal gain, but after a year, he resigned. As the soliloquy reveals, his friends could not understand his actions. He returned home and founded a monastery in Bayö, where his two main students were Geshe Sharawa Yönten Drak and Geshe Langri Thangpa, known as the ‘Sun and Moon of Ü’ (U is central Tibet).

When you truly remember death, all things will be like hay heaped before a carnivore. When the suffering of samsara truly nauseates you, the thought will frequently occur to you that you need nothing at all. At that time, your mind will genuinely turn away from ambitions for this life, and your attitude will be completely incompatible with anyone else’s.

It is very difficult to change our ways. Even at the Monlam, His Holiness commented, it is difficult to keep pure discipline for a day. However: When you have the certainty that you are going to die it is no longer difficult to give up misdeeds and cultivate virtue.

It is also impossible to make progress on the path to enlightenment if we have conflicting aims. As Geshe Potowa said:

One arrow cannot kill two deer. One dog cannot bite both your ankles. You cannot sew with a two-pointed needle. If you step forward with one foot and back with the other, you will never get where you are going. Likewise you cannot accomplish both this life and the next, and the next and following lives are more important. Thus you must practice Dharma genuinely.

Either our aims are focused on what we can gain in this life or they are focused on future lives. If we are committed to the path of Dharma our focus is on future lives. These are not just different aims but contradictory so it is impossible to hold them simultaneously. When our aim is for this life we have to commit non-virtue in order to achieve our goals, whereas if our aim concerns future lives we have to accomplish virtue. Though there are obvious material needs in this life, they should not be allowed to predominate. If we want to move forward we have to move both feet in the same direction.

The Karmapa drew everyone’s attention to the amount of time we waste every day. This life is very short, he said, but we spend half our time asleep, and even waste a lot of the time when we are awake. We need to think seriously about how we use our time. We wake up and immediately our time is consumed by activities. We get up, eat breakfast, go to work and so forth. If we can focus on a single aim, we will achieve more.

Because Geshe Potowa saw worldly aims as pointless, his attitude conflicted with that of others.

Many people have been concerned for me and given me advice—―Don’t be like that. You’ll have trouble when you are old. Keep a few things; it will aid your spiritual practice. You need to nock and shoot your own arrow. To them I say thank you; your advice to me may be true. But I have never thought they were concerned for me. Instead, I have felt even more depressed and disgusted—none of them think about the Dharma. It might be so if we were not to die, but death is certain. We do not know when we will die. What will you do if you die while still accumulating things?

Geshe Potowa practised what he preached. People were flabbergasted when he gave up the opportunity to be in charge of Rateng Monastery. Continue like this, his friends warned, and you will become a street dog. When you’re old, you’ll face lots of difficulties. You need to accumulate some things which will benefit you when you’re old, they advised.

Unfortunately, their advice made Geshe Potowa feel even more depressed because these people had failed to consider what would happen when they died.

…none of them think about the Dharma. It might be so if we were not to die, but death is certain. We do not know when we will die. What will you do if you die while still accumulating things? After you die, you could practice Dharma if you are reborn human, but you don’t know where you will be reborn or go after death.

When we consider this, His Holiness commented, we realise that it is our great good fortune that we have not died so far. We should regret the time we have wasted so far, and resolve not to leave this life empty-handed.

The teaching concluded with The Aspiration to the Stages of the Path by the great Kadampa master, Je Tsongkhapa, founder of the Geluk school of Tibetan Buddhism.

Then came the dedication prayers for the living and the dead—a final reminder of Geshe Potowa’s words:

You do not know when you will die, so resolve not to procrastinate about the Dharma. Nothing else will help at the time of death, so resolve to not be attached to anything.