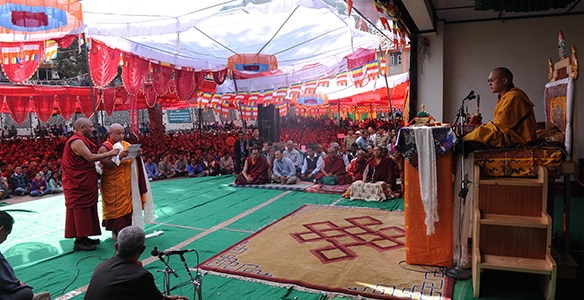 On 1–2 September an estimated 15,000 devotees turned out in the main Kinnauri town of Rekong Peo for Gyalwang Karmapa’s teachings. Described by locals as one of the largest gatherings witnessed in the region, the crowd received the Gyalwang Karmapa with visible joy and devotion.

Many devotees had travelled from outlying areas of the mountainous region, braving flood-damaged roads and difficult travelling conditions especially to receive the spiritual leader’s teachings. Organizers observed that had the condition of the roads been better—which were badly damaged in recent flash flooding—many more devotees would also have attended.

After greeting the large crowd at the first teaching session, the Gyalwang Karmapa told them that although he had made plans several times to come to Kinnaur he wasn’t able to come until now. He began the teachings by thanking everybody for coming, and shared his aspirations for peace, happiness and prosperity in Kinnaur and all the surrounding areas, which are currently recovering from natural flood disasters.

“Kinnaur and the Himalayan regions are places where Buddhism has flourished,” he told those gathered, before explaining the historical connection of the Karmapas with the region.

“This region has a particular connection with the Kagyu lineage and with the Mahamudra dharma,” he explained. “For example, over 800 years ago many of the 2nd Karmapa’s students came from Kinnaur and Spiti. And in 1948 during the time of the 16th Karmapa—a time when Tibet was independent—he also came to Kinnaur. In fact, from what I’ve heard there’s discussion of him giving a Black Crown Ceremony in the palace of the 8th King of Himachal during that time. So as I said, this is a place where the Buddha-dharma has flourished.”

The Gyalwang Karmapa then shifted to the importance of spiritual practice in the modern world. “The 21st century is a time of great developments in society, technology, and external things,” he taught. “However, happiness is still in our own minds, and it is the spiritual that benefits the mind. We need to think in these terms.”

“If you talk about mental peace, or what brings benefit to the mind, it’s a very important time for these,” he continued. “Practicing the dharma is a way of increasing the peace in our minds and improving the qualities in our minds. If we know how to practice then it can bring great benefit—yet whether it brings benefit or not depends on whether you yourself practice or not.”

During the afternoon teaching session the Gyalwang Karmapa then gave the reading transmission of the 3rd Karmapa’s Mahamudra Aspiration Prayer. As the large crowd dispersed for the day a vibrant double-rainbow suddenly appeared in the sky, viewed by many devotees to be an auspicious sign on the occasion of the first teaching in the region by the 17th Karmapa.

On the morning of the second day the Gyalwang Karmapa offered a Phowa reading transmission to those gathered. During his teaching he urged people to genuinely care for and take responsibility for others.

“We have the capacity in our brains and minds to be able to think about the pleasure and pain that other people feel,” he began. “We have that power, but it’s like the switch has been turned off. We don’t take responsibility or we don’t care—we say it’s not my business. It’s like we’ve closed the doors.”

He stressed the importance of actually putting concern for others into action. “Loving kindness is very important, and it’s also important to actually join it with practice. It’s not just a question of us taking an interest in other people’s suffering, but actually trying to engage in things to remove their suffering, and taking on responsibility.”

In the final session the Gyalwang Karmapa bestowed the short Amitayus long-life empowerment, composed by Milarepa’s disciple Rechungpa and widely practiced in both the Kagyu and Gelug lineages. After the empowerment local groups representing different regions of Kinnaur and Spiti made offerings of traditional songs and dances for the Gyalwang Karmapa.

The organizers plan to invite the Gyalwang Karmapa to return to Kinnaur to give more teachings in the future, reflecting the spontaneous affection and sincere devotion of the local people towards him.