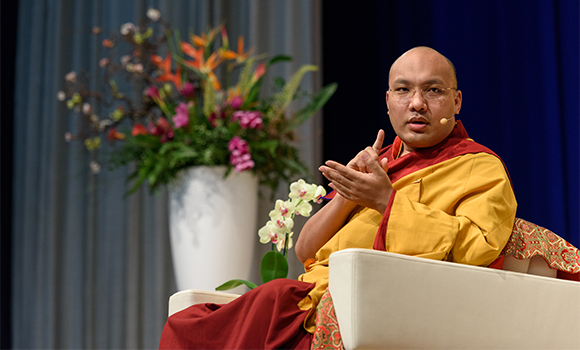 Akshobhya the Undisturbed: Paradigm of Patience

Before bestowing the empowerment, the 17th Karmapa gave a two-part introduction to the Buddha Akshobhya, detailing the story, his importance in Tibetan Buddhist tradition, and the connection between Akshobhya and the Karmapa lineage.

His Holiness began by clarifying the meaning of the name Akshobhya, explaining that in Tibetan Akshobhya is known as Mitrugpa. It means someone who is undisturbed by aggression and anger, he said, someone who remains unperturbed. The translation into English as ‘immoveable’ did not accurately convey this. Later in the teaching, he explained that within the tantric tradition, a second name Migyurpa was used, and this carried the meaning ‘unmoving’ or ‘undisturbed’.

According to the tradition, Akshobhya was originally a devout practitioner, a fully-ordained monk who asked the Buddha Big-Eyes which practice or quality was indispensable for the path to enlightenment. The Buddha replied unequivocally that the most important quality was unassailable patience, the capacity to remain undisturbed by negative emotions such as anger and aggression. Without hesitation, in the presence of the Buddha and in front of the sangha, the monk immediately vowed, “From today onwards, until I attain buddhahood, I will not hold any intention of anger or aggression towards any sentient being, no matter who they are.” Those present felt a great sense of awe and appreciation of the steadfastness of this bodhisattva, and even the Buddha Big-Eyes praised him, declaring, “You have a very stable mind…and from this time onwards you shall be known as Akshobhya. From now until you attain buddhahood your commitment not to express aggression towards any sentient being will not decline…and after you attain buddhahood, you will also be Akshobhya.”

His Holiness then examined the role Akshobhya plays within the Vajrayana tradition of Tibetan Buddhism. There are references to such states of fruition as the ground of Akshobhya, otherwise known as the undisturbed ground, and the Buddha Akshobhya appears in the presentation of the five Buddha families. Within the four classes of tantra, which reflect increasingly subtler levels of relating to the true nature of reality, Akshobhya features in the highest tantra, the anuttarayoga, where he is invoked as representing the non-dual wisdom of the enlightened mind of Buddhahood. This is where the link between Akshobhya and the Karmapa lineage lies.

The Buddha Akshobhya is particularly connected to the Black Crown ceremony, His Holiness explained. This ceremony had been performed in many different countries by the 16th Karmapa Rangjung Rigpe Dorje and witnessed by some of the older members of the audience present today. Akshobhya symbolizes the enlightened mind of the Buddhas, unchanging dharmata, which is the changeless, true nature of reality.” In Tibet, the sky is often used as a symbol for the quality of changelessness, and by association its colour came to be used to represent the unchanging nature. “The Black Crown isn’t really black”, the Karmapa continued, “but rather a dark blue, the colour of the Tibetan sky.” Thus, “In terms of the Black Crown Ceremony,” the Karmapa explained, “the Black Crown itself is a symbol representing the changeless enlightened mind, the wisdom of changeless true reality.” If they have the merit, those who witness the Black Crown ceremony “through the play of outer and inner interdependence and the interdependent relationship between symbol and that symbolized” can come to recognise the true nature of their own mind, the wisdom of changeless true reality.

Following an extended break during which His Holiness gave audiences to groups and individuals, the teaching resumed mid-afternoon. Having completed the background information in the morning, the Karmapa now shared his own personal reflections on the Buddha Akshobhya and the Akshobhya practice.

He described how his involvement with the Kagyu Monlam, during which the full Akshobhya ritual has been performed for the last ten years, had led him to research the Akshobhya tradition, examining sutras which feature Akshobhya, including those which are only extant in Chinese not Tibetan. In this way, he learned more about Akshobhya and developed a more profound connection with him and the practice. He recounted how the story of Akshobhya had impressed him deeply. “I feel very inspired personally by the motivation that Akshobhya gave rise to,” His Holiness said, “and the pledge he made not to engage in any anger toward any sentient beings from now until he attained full enlightenment.” He explained how he felt that studying these sutras had planted some beneficial habitual seeds in his mind stream. He feels deep respect for Akshobhya, especially given that Akshobhya committed to keep his vow until he reached enlightenment, a process which might take up to 30 countless aeons. Personally, the Karmapa said, he found the best instructions come from studying living examples of the past masters, of the Buddhas and followers of the Buddhas. Written instructions could be good, but in the end, they were just letters, he concluded.

Akshobhya’s achievement may be far removed from what we ourselves are capable of at this point in time. However, the Karmapa advocated that we should consider our own aspirations in the light of Akshobhya’s aspiration. “What about making the commitment to refrain from aggression from now until we die?” he suggested. “Even that is quite difficult to be decisive about. What about working with one week as our time frame? Could we commit to not engaging in any aggression or harbouring any anger towards other sentient beings for a week? What about for just one day? I’m not going to engage in any aggression from now until the evening.” Just thinking about it was not enough, he warned. We have to challenge ourselves and put in the effort to see what we are capable of.

In dealing with negative states of mind such as aggression, there seemed to be two common mistakes people made, he observed. Some people think we have to suppress these emotions: “I’m a Buddhist, I shouldn’t get angry.” His Holiness quoted a Tibetan proverb: If there’s a fire burning in your belly, smoke will come out of your mouth. Trying to suppress our emotions, he counselled, is not a healthy way to deal with them.

Another mistaken approach is to apply antidotes from time to time when we feel strongest and try to escape from mental afflictions when they become intense, but we never address their root cause. The best approach, he advised, is to relate to our emotions honestly, developing a sense of enthusiasm or joy in doing so, in order that we voluntarily take on the responsibility of transforming them. Otherwise the situation will be forced, and that could never succeed.

“The intention to refrain from aggression towards sentient beings is very important,” the Karmapa emphasised, “and it’s important because it is the antithesis of the mind of love towards sentient beings. The mind of love wishes for sentient beings to possess happiness, whereas the mind of aggression is the mind that wishes harm on them.” His Holiness then suggested a technique which we could use: when a situation arises, we need to control our instinct to react by creating a little distance mentally between ourselves and the situation. By being heedful, attentive and aware, and noticing immediately if we have slipped into a reactive mode we can avoid the unconscious reactions which increase our negative emotions. Mindfulness is the key.

He identified two types of disaster in the world which generate fear. The first type includes war, epidemics and natural disasters and occurs outside ourselves. The second type of disaster arises “from inside, within our own mind. That is the absence of love, the failure to cultivate love in our minds, and to ensure the presence of love in our mind.” It’s very important for us to rely on heedfulness, mindfulness and attentiveness. Such a situation provides the opportunity for anger to arise, and that is the true disaster. If we do not guard our mindfulness, we can become participants in the creation of this disaster in direct and indirect ways.”

As the afternoon session drew to a close, the Karmapa expressed the hope that they had been of some benefit to everyone and that they might in some way contribute to their processes of mental transformation.

“Sometimes we feel we’ve received blessings through gurus, or received their enlightened compassion, which causes us to feel faith and inspiration, “ he said. “ or at other times we may feel we have received the kindness of mother and father sentient beings. The effect is that some kind of mental shift occurs. It’s my wish and belief that maybe through this programme of teachings and the empowerment, you yourselves will be able to find some inspiration and basis for finding encouragement within yourselves that will be the beginning of making a positive change.”

The audience drifted slowly out of the auditorium, and many seemed reluctant to leave this space where they had received a day of blessings.