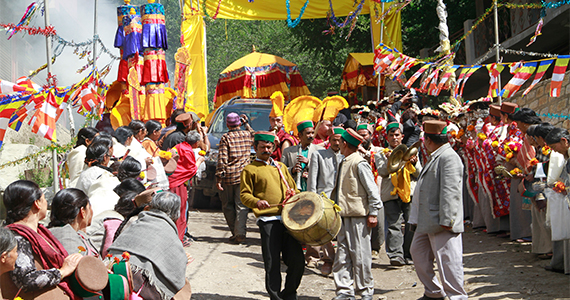 After successfully completing two days of teachings, the Gyalwang Karmapa concluded his tour by visiting several monasteries and nunneries in Kinnaur and along the route back.

He began on September 3 at the Mahabodhi Society temple in Reckong Peo, where he performed a prayer ceremony and gave a short speech for those gathered.

Next he set off for the Sangla valley, arriving at the historic Bering Nag Temple around 11am. After circumambulating the shrine he performed a special blessing ceremony for the three local protective Bering Nag deities that abide at the temple. “I requested the deities to protect and help you, and care for your wellbeing,” the Gyalwang Karmapa told the crowd of locals gathered to greet him. He explained that the 16th Karmapa had also visited this temple, and that he had a very special connection with the three local deities as well as with the people of the area.

While at the Bering Nag Temple the Gyalwang Karmapa also gave a short dharma teaching to the local people, telling those gathered that it’s difficult to call ourselves Buddhists unless we are actually good people.

“Normally we think ‘oh, I’m a Buddhist’ and we have conviction in this. But when we have truly become a Buddhist we see a real change in ourselves, a transformation in ourselves. If that does not occur we become someone who is not so upright or straightforward—we just sort of imagine or have the conceit that we’re Buddhist. And this creates many difficulties and problems.”

His next stop for the day was at Lhamo to visit the new nunnery of Lochen Rinpoche, who is the reincarnation of the great Lotsawa Rinchen Sangpo. There he gave a talk to around 30 young nuns and offered them words of encouragement. He told them that in the modern era nuns have equal access to practice the dharma as monks, and offered the nuns his full support. He urged the nuns to have self-confidence, and to take advantage of all the opportunities for study and practice that are now opening up for them.

After resting once more at the border town of Rampur overnight, on 4 September the Gyalwang Karmapa continued his journey back from Kinnaur, stopping specially at the Bon Menri Monastery in Solan. There he was greeted by Kyabje Menri Trizen, who is the supreme head of the Bon religion and also Abbott of the monastery. Walking hand-in-hand into the gompa, HH Menri Trizen then seated the Gyalwang Karmapa on the throne to receive a traditional welcome ceremony and mandala offerings.

Tibetans from all around area gathered at the Bon Menri Monastery to greet the Gyalwang Karmapa. In a short talk to them he explained that many of the previous Karmapas have enjoyed a strong spiritual connection with the Bon religion, particularly the 2nd, 3rd, 5th, 7th, 10th and 16th Karmapas. The local Tibetans then made song and dance offerings for the Gyalwang Karmapa before he departed.

After concluding his tour of Kinnaur the Gyalwang Karmapa next travels to Delhi, where he has been invited to chair a session and speak at an important meeting of world Buddhist leaders, the 1st Founding Members’ Conclave of the International Buddhist Confederation.