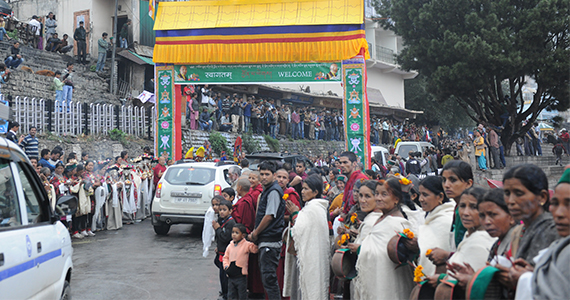 Leaving Gyuto Monastery in Dharamsala around 8.45am on the morning of 30 August, the Gyalwang Karmapa set off on the long road journey to Kinnaur. Local Tibetan communities came out to greet him as his motorcade wound its way through several settlements en route.

Passing through the Tashi Jong Tibetan settlement in the morning, hundreds of monks, nuns and laypeople lined the road bearing traditional scarves and incense, eager to catch a glimpse of the spiritual leader and escort him on his way. Similar scenes were repeated as he later passed through the Tibetan settlements at Bir and Suja, while the smaller Tibetan community at Mandi also came out to receive him.

After pausing for lunch in Mandi the Gyalwang Karmapa resumed the long and winding journey through the mountains, finally reaching Rampur close to midnight. There he was hosted as a State Guest at the Circuit House of Rampur, which is reserved for visiting government officials and dignitaries.

The following day on 31 August the Gyalwang Karmapa continued his journey, arriving at the border town of Chaura in the late afternoon. There he was officially greeted and welcomed with a traditional Kinnauri ceremony. Local Parliament Members and officials, as well as Choegon Rinpoche, Lochen Rinpoche, Superintendent of Police and many devotees gathered to warmly welcome him, offering displays of traditional Kinnauri songs, costumes, and music.

Later as he resumed his journey many local devotees once again spontaneously lined the roads, eagerly waiting to welcome the Gyalwang Karmapa to their home. Many of the roads the Gyalwang Karmapa passed still bore signs of the heavy flooding that struck the Kinnaur region in June. During the worst of the flash flooding 23 people lost their lives while hundreds more were displaced.

The Gyalwang Karmapa’s tour of the region also aims to offer spiritual support and encouragement to those recovering from the disaster, the majority of whom are Buddhist. He is scheduled give teachings on 1–2 September at Rekong Peo.