“Environmental Conservation Must Be the Essence of Our Spiritual Practice”: Gyalwang Karmapa 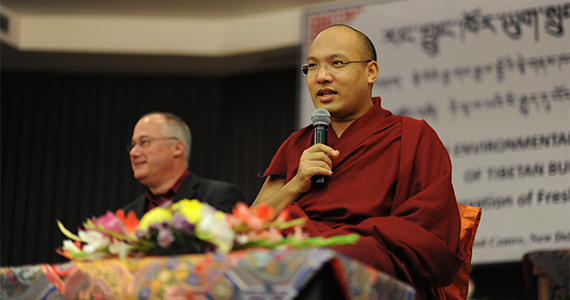 On the final day of the 5th Khoryug Conference on Environmental Protection being held in New Delhi the Gyalwang Karmapa spoke passionately about the environmental emergency facing the world, and pointed to our individual personal consumption choices as one way to make a difference.

“Because of the sheer numbers of the human population and because of modern technology, we are having a horrific impact on our environment,” he told the 60 monastic delegates gathered from across the Himalayan region. “And we’ve become so jaded about this on the whole that it is as if we are asleep in the sleep of ignorance about what we are doing to the environment.”

“Each and every one of the more than 7 billion people on this planet has a brain. We’re all capable of understanding this, and yet our ignorance about our misuse of the environment is shocking. We need to wake up from this ignorance, especially those who wish to practice spirituality. This is perhaps our greatest responsibility as spiritual practitioners.”

The Gyalwang Karmapa urged Mahayana Buddhists to bring environmental conservation into the very heart of their spiritual practice.

“The conservation of our environment—which is the ground of the existence of billions and billions of beings—must be our primary concern as Mahayana practitioners. Environmental conservation must be the very essence of our spiritual practice.”

He appealed to the gathered monastics to make a difference in their individual communities, and pointed out that there are simple choices we can each make to reduce our personal consumption of finite resources such as water.

“We need to think not only about our direct use of water, but also about our indirect use,” he said. As an example, he observed the large difference in the amount of water used to produce meat as opposed to grains. “Considering the amount of water that is expended for the consumption of meat, this adds another ethical concern to the eating of meat.”

Turning next to the environmental emergency faced in Tibet, the Gyalwang Karmapa called on China to take responsibility for protecting Tibet’s fragile and important environment.

“When we speak of the Tibetan cause, sometimes people mistake this as a uniquely political issue,” he began. “But in fact it is much more than that, and most importantly it is an environmental issue. The Tibetan plateau is of great environmental importance to this world, and therefore we call it the Third Pole and the water tower of Asia.”

The Gyalwang Karmapa then pointed out that traditionally the Tibetan way of life was lived in harmony with the environment.

“Since this way of life was a means of preserving the environment, it must at all costs be preserved—not only for the sake of Tibet itself, but because of the profound connection that the Tibetan environment has with all Asian nations, including Tibet’s adjacent neighbors.”

“With regard to Tibet’s neighbors,” he continued, “of course China took over Tibet more than 50 years ago. But that does not mean that China can do whatever it wants to the Tibetan environment. They must behave responsibly.”

“With regard to the connection between Tibet and India, this connection is thousands of years old and is extremely profound. It is not simply a material or even a cultural connection – it is a spiritual one, the deepest possible connection. So therefore, India also is intimately connected with and bears some responsibility for this environment. This is true of other Asian nations as well.”

The Gyalwang Karmapa’s comments came at the conclusion of a week of training in water conservation issues for monastic representatives from 55 monasteries and nunneries across the Himalayan region. Under the umbrella of the Khoryug organization, which the Gyalwang Karmapa chairs, member monasteries and nunneries in the Himalayas actively protect their local environments through activities such as tree-planting drives, clean-ups, conservation of water resources, waste management, and education initiatives for their local communities.

Tenzin Norbu, Director of the Environment and Development Desk at the Central Tibetan Administration and who was a key speaker at the conference, commended the activities of Khoryug under the Gyalwang Karmapa’s leadership. He pointed out that the organization set an example not only for other Buddhist monasteries and nunneries from all lineages across the Himalayan region, but also for non-Buddhists too.