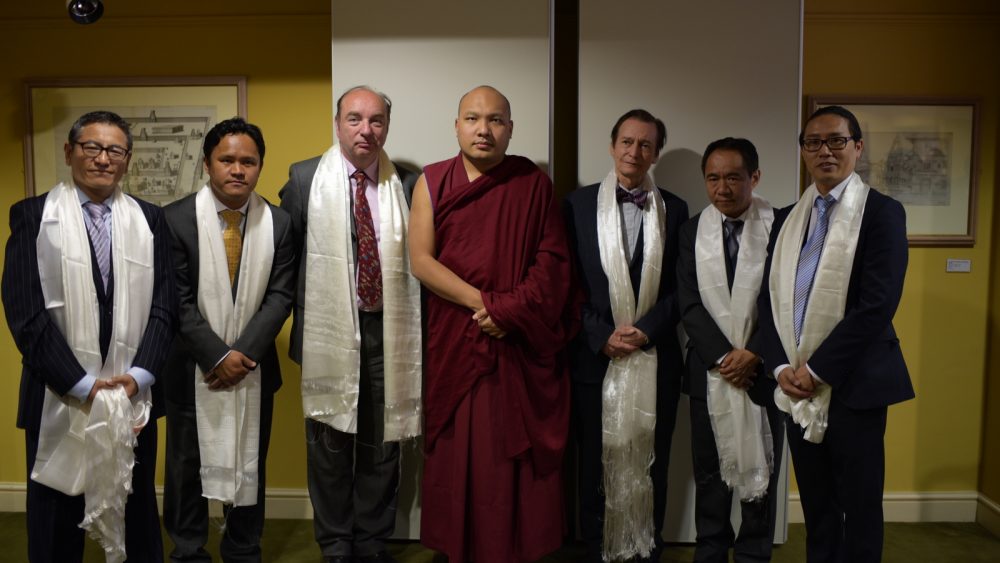 Seeing from the Perspective of the World Around Us

May 23, 2017 – The Royal Asiatic Society, London, England
Today the Gyalwang Karmapa came to the famous Royal Asiatic Society to speak about the environment with long-term, core members of the Tibet Society, the world’s first ever Tibetan support group. The Chair, Fredrick Hyde-Chambers OBE, delineated the history of UK and Tibetan relations and the Society’s current activities to support the Tibetan cause. President of the Society, Rt Hon Norman Baker, welcomed the Karmapa with a quote from his book, The Heart is Noble: “To protect the environment is a way to care for all sentient beings.”

The Karmapa then addressed the group, explaining that he had started the organization known as Khoryug to support the protection of the environment in the Himalayan region and to educate monks and nuns so that they could share this crucial information with the communities surrounding them. He stated that the issue of the Tibetan environment transcends politics and deeply affects all the countries around Tibet as well since it is the source of water for millions of people. Tibet is known not only as the Roof of the World but also as the Water Tower of Asia. The Karmapa expressed the hope that more people would become aware of this and pay attention to what is happening in the Tibetan region.

“When it comes to protecting the environment of Tibet,” the Karmapa remarked, “one of the best sources to consult is the Tibetan people themselves, as they have related to it for thousands of years. Knowing it inside and out, they naturally understand how to create a sustainable environment. Their whole hearts and minds are invested there. The Tibetans’ traditional approach to the environment sees it as a sacred field inhabited by gods and spirits. Their outlook has great sincerity and respect for their natural world.”

“These days, however, technological and material advancement have also brought along a degradation of these ancient values of how to relate to the environment,” the Karmapa deplored. “External material improvement has weakened the protection of the environment; for example, there are more dams on the rivers and increased mining of the land. Some places, considered sacred sites, have been opened up to exploitation. This has been harmful to the environment and also harmful to the faith and devotion practiced for so long by the Tibetans.”

During a question and answer period after his talk, the Karmapa was asked, “How can China be convinced not to exploit the environment?” He replied that large numbers of Chinese youth are studying abroad and are seeing a larger world picture. This can give us hope. He also mentioned dialoguing with scientists, and then summarized, “The main change has to happen in China itself. We have tried before to influence things from the outside, but have not been very successful. The key is sharing information among scientists or, in a more political realm, sharing information about the environment and engaging in discussions about that.”

The next questioner asked, “Is the future of Tibetan Buddhism outside Tibet?” The Karmapa responded through an analogy: “Tibet is the root and therefore important. If the root is not good, the branches will have a difficult time. For Tibetan Buddhism to spread over the world, it is important that the root remain strong in Tibet.” He also noticed that foreigners’ interest in study is greater than their interest in practice, whereas in Tibet and China, the situation is reversed and practice is more important.

A third person queried, “Are there teachings in Tibetan Buddhism about protecting the environment?” The Karmapa answered, “In the training in the conduct for a bodhisattva, there are instructions for the practitioner to aspire to become like the four elements and to reflect on how much benefit they bring: ‘As the four elements provide benefits and sustenance for living beings, in a similar way, may I become a benefit to others.’ This practice will increase our empathy toward others as well.” The Karmapa also taught that it is important to see the natural would around us not as an object but as a subject, so we experience the natural world from a first person perspective. This allows us to see how living beings and the environment are reflections of each other.

At the end of the Karmapa’s talk, Tsering Tashi, the Vice-Chair of Tibet Society, gave thanks to the Karmapa and offered him a gift. The audience was invited to the third floor of the Royal Asiatic Society where copious refreshments awaited and members were also were able to meet with the Karmapa.