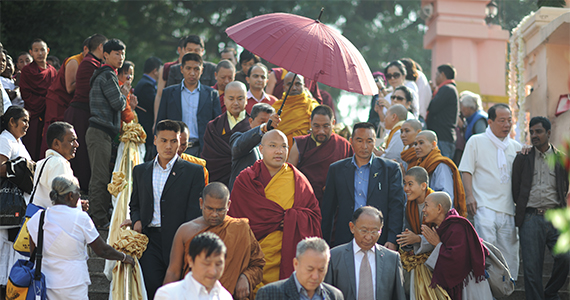 In a significant event for all concerned, His Holiness the 17th Gyalwang Karmapa Ogyen Trinley Dorje became the first world spiritual leader to visit the central shrine of Buddhism, the 1500 year old Mahabodhi temple complex, since the bombings by extremists earlier this year.

At the entrance to the temple grounds, he was welcomed warmly by the Monk-in-Charge, the Secretary of the Mahabodhi Temple Management Committee and the District Magistrate, who then escorted him.

By-passing the newly-established security checkpoints, Gyalwang Karmapa walked into the complex, down the central steps and headed directly to the Mahabodhi temple shrine room. He was greeted along the way by devotees from around the world. Flanking both sides of the pathway, they proffered pink and lilac lotus blossoms or ceremonial white scarves, and asked for his blessing. Inside the shrine room, His Holiness first offered a three-piece set of robes of hand-woven golden silk to the image of Lord Buddha, followed by seven bowls of fruit, flowers and food. As the monk-attendant draped the new robes over the Buddha image, His Holiness prostrated three times before commencing prayers in praise of Lord Buddha and for the peace and well-being of the world and all sentient beings. The short ceremony concluded with the lighting of a butter lamp.
When His Holiness emerged from the shrine room, hundreds of followers thronged behind him as he completed a circuit of the inner route around the temple, followed by a circuit of the outermost route. Blue skies and mild weather, much cooler than in previous years, made for a quick and comfortable circumambulation.

His Holiness was unable to complete the middle circuit this time because of another noteworthy event being held in the temple complex: the gold-plating of the dome of the 180- foot high Mahabodhi temple. The work is being carried out by a team of forty technical experts from Thailand, who work from bamboo scaffolding high above the temple grounds. They will be using nearly 300 kilograms of gold which has been gifted by the King of Thailand and his people. More than a thousand Thai monks, nuns and lay pilgrims, dressed in traditional white lay pilgrim’s robes, have gathered for the occasion. As His Holiness completed his circumambulations, the sound of their prayers and chanting filled the grounds.
This was the first official event of the Gyalwang Karmapa’s 2013-2014 winter programme in Bodhgaya.