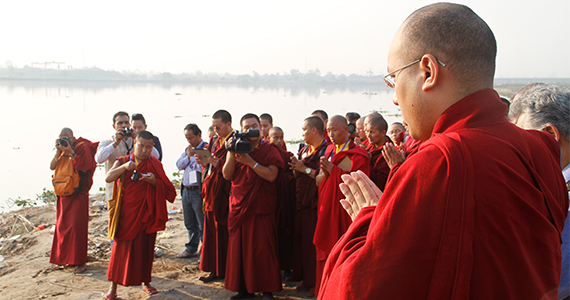 On the 4th day of the Khoryug Conference on Environmental Protection the Gyalwang Karmapa, together with 60 monastic representatives from across the Himalayan region, left the conference table and headed out into the field.

After spending the previous three days training in a range of water problems and their practical solutions relating to the conference theme of ‘Conservation of Freshwater Resources in the Himalayas’, the participants were then exposed to examples of such water problems and solutions in the real world.

Heading over to a site on the Yamuna River in east Delhi, the Gyalwang Karmapa joined the monastics for a short river-blessing ceremony in the afternoon.

The Yamuna River is considered sacred, with its source at Yamunotri in the Himalayas being one of the holiest Hindu pilgrimage sites. And yet, paradoxically, the river is also ecologically considered a ‘dead’ river, heavily polluted and in some places barely flowing due to human interruption of its natural course.

At one of the river’s more polluted sections the Gyalwang Karmapa was met by Manoj Misra, Director of the Yamuna Jiye Abhiyaan organization that is dedicated to restoring the river. Standing together on its banks with the gathered monks and nuns, the Gyalwang Karmapa led prayers for the wellbeing of all living beings dependent on the river—from its pure Himalayan source right down to where it flows into the great Ganges river.

With waste and litter visibly coating the surface of the water and a strong odor permeating the air, the conference participants next listened as an elderly local farmer, who has spent his entire life living next to the river, described being able to drink directly from its once-pure waters when he was a small boy—driving home the message of our profound human impact upon the environment.

Earlier that morning the monastic representatives had also visited the Centre for Science and Environment, one of India’s leading environmental NGOs. The group toured the sophisticated rainwater-harvesting and waste-water treatment systems in place at the centre, which are composed of all-natural filters and methods, and received detailed training on these water systems. Plans are underway for the Centre for Science and Environment to partner with Khoryug members to introduce similar rainwater-harvesting and waste-water treatment systems into their own monasteries in the future.