A lively demonstration by monks from the 20th Kagyu Gunchoe of their debating skills on the topic Turning the Wheel of Dharma preceded the awards for the Gunchoe debate competition. This was followed by a long dedication monologue delivered by Lhagpa Yeshe, a monk from Benchen Shedra. This composition containing sections in both verse and prose is the traditional way to finish a debate and is known as the Noble Words [Tib.Tsig Zang].

Then came the awards themselves. The winners received a trophy, a certificate and a cheque to be spent by their shedra.

First prize for Collected Topics (Dudra) was awarded to Lava Shedra. They received a trophy depicting a pecha atop a lotus and stem, and a cheque for 100,000 Indian rupees.

Second Prize for Collected Topics went to Benchen Shedra. They received a trophy of Manjushri’s Sword of Wisdom and a check for 50,000 Indian rupees.

First Prize for Validity [Tib. Tsema] was awarded to Bokar Shedra. They received a trophy and a cheque for 100,000 Indian rupees.

Second Prize for Validity went to Sherabling Shedra. They received a trophy and a cheque for 50,000 Indian rupees.

First Prize Overall was won by Bokar Shedra, which received a Manjushri Sword of Wisdom trophy and 100,000 Indian rupees.

The ceremony continued with prizes for individual monks. With great humour, His Holiness pretended not to be able to read the names of those who had won the individual prizes, and let the tension mount, but eventually he announced:

Each monk received a certificate and a personal prize of electronic equipment.

Awards for The Examination of Monastic Forms

The examination was conducted over two nights last week before the Monlam began. Twenty- four monasteries and nunneries competed against each other. The competition is organised into two categories : gelong [fully ordained] and getsul/getsulmas [novice].

At the moment there are no fully ordained nuns, so the prizes in the first category all went to monasteries. However, in the ultimate development of the trend seen last year, when nunneries won two of the three prizes, all the prizes in the novice category were won by nunneries this year. Karma Drubdey Nunnery from Thimpu in Bhutan won first prize for the second year in succession. 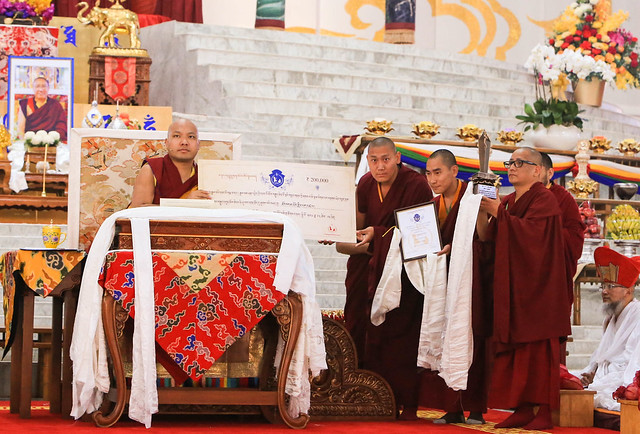