Working Towards a Compassionate Society 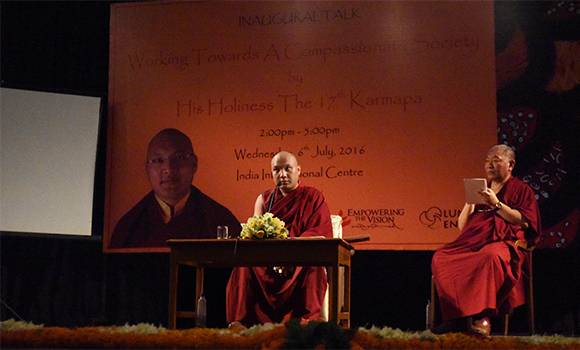 July 6, 2016 – New Delhi, India
Today the Gyalwang Karmapa gave the opening address for a three-day program, entitled Compassion in Action. It was initiated by a group of Tibetan and Indian social activists, residing in Delhi and nearby, who support human rights and universal responsibility. The event was in celebration of a yearlong journey, beginning with HH the Dalai Lama’s birthday last year, which involved 11 schools and 1000 young people. Through a variety of creative modalities, they explored, shared, and interpreted compassion in action, the legacy of Mahatma Gandhi and H.H. the Dalai Lama.

The program was sponsored by Lunar Energy, a group of socially engaged artists, and by Empowering the Vision, whose director Yudron Aukutsang, welcomed His Holiness the Karmapa. She explained that her organization is dedicated to empowering young people and seeks to develop self-reliant and dynamic Tibetans who become contributing members of the global society. The group especially focuses on education and providing career opportunities. She remarked that all those engaged in the project were inspired by the young people’s sincere desire to engage in nonviolence and compassion.

Today’s program began with cultural performances by students from Majnu-ka-Tila’s Tibetan Children’s Village, which were followed by an abridged version of a theater piece, Compassion in Action, by Jaya Iyer, the founder of Lunar Energy.

At the very beginning of his talk, the Gyalwang Karmapa offered his prayers to HH the Dalai Lama on his 81st birthday, wishing for the spiritual leader’s good health and long life, the flourishing of his activities and the fulfillment of all this wishes. Noting that the topic of the talk was a compassionate society, the Karmapa remarked that all people have compassion or empathy; when they see someone suffering, they are concerned and wish to help. Buddhism teaches this and many scientists also subscribe to it.

These days, however, violence seems to abound: we are witness to numerous bomb blasts, mass shootings, wars, and so many violent activities that it can be hard to believe that a natural love and compassion exist in people’s hearts. The Karmapa explained that having this natural capacity is not enough: it must be trained.

It is crucial, he stated, that we understand the interconnected and interdependent world in which we all live. “The information age has given us nonstop news from around the world and brought people closer together,” the Karmapa said, “but people remain self-centered and focused on what they want for themselves. We need to recognize this mindset and pull ourselves out of such a narrow fixation; we must learn to take responsibility for others as well.”

There are many ways to understand self and other, he noted, but what is important here is that we know how dependent our existence is on others. There is not one living being that does not reply upon others. “But usually,” he said, “thinking that we are independent, we experience distance between our self and another; we do not recognize that we are a part of them and they of us.” Therefore, learning to develop a way of thinking imbued with interdependence is very important.

We all have this basic capacity to love others, he emphasized, but how we are brought up and our education influence our mind, so we come to feel and express different levels of love and compassion, and can also switch them on and off. “What we need,” he stated, “is the right way of seeing, an accurate outlook that is based on the way things actually are—mutually dependent one on the other.”

The Karmapa then turned to an analogy. To keep ourselves fit and in good health, we know that we must exercise our body everyday. Likewise, we need to train our minds to bring compassion and love into our hearts. And further, “Compassion is not just a feeling,” the Karmapa explained, “it allows us to face suffering with courage.” He continued, “We need to train our minds in love and compassion, and not just by making some ordinary effort, but engaging intensively in the practice.” In the beginning, we can start with testing it out, seeing how training in love and compassion works for us and then gradually transform our lives into compassionate ones.

The Karmapa concluded his talk reprising his prayers for the long life of HH the Dalai Lama and giving his thanks to all who made the arrangements for today’s program, which was very meaningful. He then consented to answer a few questions from the audience.

The first question came from a teacher who asked about how she could talk with young people about practicing compassion on a day-to-day basis. How do we move toward undoing the fixation on a self? The education system is so driven by competition for good marks and high performance.

The Karmapa responded by speaking of how language skills develop. Everyone has the capacity to speak a language, but if you leave a very young child in a wilderness without human contact, that child will not develop the ability to speak. Similarly, though a child has the natural capacity for compassion, they need to make contact with the language of compassion and loving-kindness. If we can tell stories about compassion and use these words daily as much as possible, this in itself will place habitual patterns deep within the mind of the child, and thee can be transformative. The Karmapa added that children should not be pushed or pressured to be compassionate. The experience should be joyful so that they take to compassion with enthusiasm.

“When I was young,” he said, “my parents talked about compassion, even for small animals and insects, which should not be killed.” We are young, we all have animals that we like and feel close to, so children can begin with feeling love and compassion for them and then expand this to other animals and other children.

The next question was about artists who have conflicts in their lives and who usually borrow their subjects from outside, so they know about suffering and what is happening in society. How can artists find a way to heal themselves through their art?

The Karmapa replied that art in general is a vast subject covering many different topics. Personally, he is engaged in poetry, painting, and theater so he knows a little about these. Many times when we talk about art, he said, we are talking about what we show to others, whether paintings, performance art, or other forms, and we have made a lot of effort so that people might be moved by what we do. Another kind of art, however, is an inner art, which is focused on creating a happy, fulfilled, or beautiful mind. These two different arts should be balanced.

“These days, it is considered important for artists to express emotions though their art,” he noted, “yet I feel that art can also create an inner peace, bringing calm within us. This is very important. Our contemporary world is quite turbulent, which in turn is reflected in our own emotions.” At the same time, however, it is important to bring about inner peace and calmness. If we can do that, then we can also express this inner tranquility through art. So we can do both: create an interior calm and reveal this to others.

The subsequent question concerned the recent violence in the world and how to think about and work with it.

The Karmapa responded that during the sacred time of Ramadan, when people seek to accumulate positive deeds and avoid negative ones, it is heart-wrenching to learn of 120 people killed in Iraq, of murders in Bangladesh—the likes of which had never occurred in its history—and, in particular for people who are religious, the bombing in Medina, a very sacred place in this world. Hearing of these events creates fear, and more than that, a very profound sadness, especially for all of us who follow a religion, to see such horrible acts committed in its name.

As followers of a particular religious tradition, we support that way of faith, and yet it is an open question whether or not we are promulgating the actual message of our founders. It is not easy to convey their message correctly and this applies to all religions. No one is born a terrorist. They become one through the circumstances of this contemporary world and for that we all bear responsibility. Actually, we carry a greater responsibility than before for our ways of thinking and our behavior. And it is certain that we cannot wait around expecting others to start becoming peaceful and compassionate; we must begin with ourselves, each of us must make it our responsibility to work on ourselves to become more compassionate and peaceful.

From the point of view of those who believe that we were created by the Almighty, all of us have been given the special gift of being able to think, the Karmapa said, and therefore, we need to use our thinking power, the power of our own understanding, to see what is right and what is wrong. For example, we all carry responsibility for the environment of our planet, which is something everyone should be thinking about.

The last question asked about the relationship between wisdom and its practical application as bodhicitta in a relative world.

In response, the Karmapa chose to talk about the classic Buddhist teachings of no self (or selflessness) and emptiness. “We need to expand out way of thinking beyond a small narrow self,” he stated, “and see that we are not an single, isolated entity but connected to the whole universe in an interlinked net.” He continued, “When we say ‘no self’ it does not mean that the self is annihilated and no longer exists. What does not exist is an independent self.” In using the term self, we refer to something that is deeply interconnected with the whole universe: what we call “I” or “self” is not independent, but interdependent. When we come to understand this, then emptiness affords us spaciousness and continual opportunities. “Emptiness is not just a philosophical position,” he explained, “but something that reduces our selfish attitude and increases our compassion. It transforms our mind and our way of life.”

On this positive note, the Karmapa closed his presentation. In thanks, he was offered a painting from the exhibition by the organizers, and all the people who had been working on the project for the past year were invited up on stage to have their photograph taken with the Karmapa and receive his blessing.

The second day of the program would see a panel discussion on compassion and social movements, and the third, a panel on compassion and education. Throughout the three days, at the Alliance Française were exhibitions and creative workshops of visual, performance, and literary pieces presented by students from the 11 participating schools.