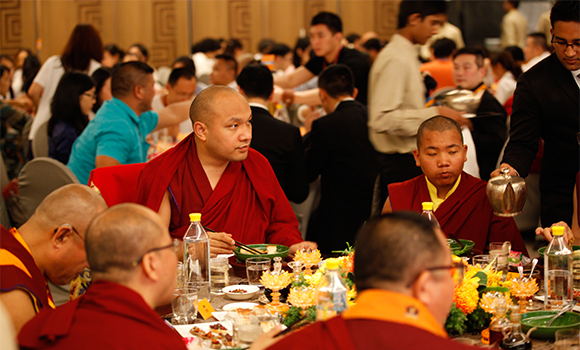 June 25, 2016 – Delhi, India.
The final evening of the Delhi teachings saw a festive dinner to celebrate the four days of teachings and express thanks to all who had made the event possible. To the sound of applause, the Gyalwang Karmapa entered the dining hall through the garden door and took his seat at the central table. The Chairperson of the Karmapa Khyenno Foundation (KKF), Lama Dawa, gave heartfelt thanks to all who had helped, starting with His Holiness who bestowed his compassionate blessing, and including all the members of the sixteen Dharma centers who worked very hard night and day and in great harmony, leaving behind a sense of separation between self and other.

A slide show depicted the Dharma activities of KKF, including sponsoring teachings, setting up medical camps, and tree planting. Then a series of classic Chinese figures in brilliant brocades and bright masks moved through the audience to the stage. Of the three old men with long beards, the one carrying a peach represented long life; the one carrying gold, wealth; and a third carrying a curved staff, success and fulfillment. The peach, exchanged for a large white and red-blushed bun was offered to the Karmapa as were the gold and staff.

Lama Dawa also offered to the Karmapa a tray will stacks of note books, representing the 500 copies of the Sutra of Offering Gratitude to Our Parents, which center members had written out. This text was chosen for the classic Dharma activity of copying a sacred text because the Karmapa had often mentioned how he missed his parents after he left Tibet. In another personal touch, three members of the Hong Kong Sanghas told their experiences of meeting the Karmapa. There was also a slide show of the seminar, entitled Compassion in Action, with images of the last four days to remind everyone of the special event.

The Karmapa was then invited to speak, and he told of how he identified with the volunteers and all the work they had done. In Bodhgaya during the Kagyu Monlam, he, too, likes to work with the people who are preparing the events and not just sit on the throne. At the end, the MC, Thomas, asked the Karmapa how the organizers had done, and the Karmapa gave his usual response, “It can always be better.” Thomas replied, “Does that mean you’re giving us another chance next year?” “Oh, you tricked me into that one,” the Karmapa laughed.

His Holiness then gave white scarves and presents to the main organizers, and lights were dimmed for the Lamp Prayer. First the Karmapa lit his lamp of a many-petaled white lotus and everyone else followed with their lotus lamps until the hall was glowing and filled with the prayer that the light of the Dharma spread throughout the world.