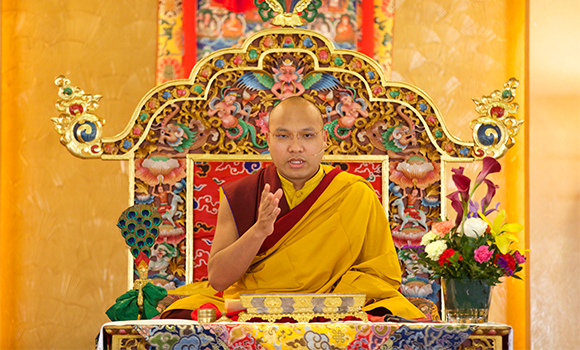 (April 12, 2015, Queens, New York) On his third day in New York, His Holiness came to Flushing Meadow Park, the site of the 1964 New York World’s Fair, whose theme was “Peace through Understanding.” His teaching took place in the circular conference hall of Terrace on the Park, which seemed to float high above the ground like a huge mandala suspended over the meadows. The Karmapa’s throne faced panoramic views that opened out to vistas of the city, an immense globe of stainless steel and the light blue sky beyond.

The circular hall was filled to its outer circumference with over 2,000 people, each of whom had received a blue envelope containing a booklet with the daily practice of Akshobhya in Tibetan, Chinese and English. This Buddha was the subject of the morning teachings, which served as a prelude to the Akshobhya empowerment in the afternoon. Like the teachings of the previous day, this day’s activities were organized by Danang Foundation.

The Karmapa began by saying that he would first talk about his reasons for doing this practice. “When I was young, I used to lose my temper. Usually I was alright but from time to time I would get quite angry, which we all have the capacity to do. Then I noticed that when I went to India, these incidents began to increase since I faced many difficult challenges. Afterward I felt great regret and realized that getting angry was wrong, yet while I was angry, I had little control over it.”

Later when the Karmapa was working on texts related to Akshobhya, he looked into the meaning of the practice and discovered that one had to be very careful about not getting angry. He began to develop “a special feeling in relation to Akshobhya, and once it began to arise within me, I noticed that I became able to control my temper.” Inspired by this teaching, he began to explore texts to learn more about Akshobhya. The Karmapa said that he felt that the most important among all the Buddha Akshobhya’s numerous aspiration prayers was the commitment: “Now that I have become a bodhisattva, I will never allow myself to get angry at any living being.”

The Sanskrit name Akshobhya was translated into Tibetan as “Mitrukpa”, which means “imperturbable” or “immoveable” because his mind was not disturbed by any of the afflicting emotions. “This is an amazing feat,” His Holiness said, “yet in the beginning he was just an ordinary person. We ourselves would find it difficult to refrain from anger for just one day to say nothing of not getting angry throughout the whole path to enlightenment.”

The Karmapa disclosed, “Akshobhya’s great courage moved me and made me feel that maybe I could make a promise not to get angry—perhaps not until Buddhahood since I don’t know what my next lives will be—but at least never to get angry to the end of this life.”

The Karmapa then gave a precise definition of what real practice is. Supplicating Akshobhya as a deity is fine, he said, but did not constitute true practice. “Akshobhya is the embodiment of the courage to overcome anger, which up to now, we have probably not tried to do; he encourages us to overcome it, and doing that is the true practice of Akshobhya.”

How does he give practitioners strength? He gives the courage to become warriors who wear the armor of patience. When shielded by armor, we are fearless in battle because we are protected. The Karmapa stated, “Up to now, we have feared to fight with our anger, to tackle it head on, and that’s why we’ve never dealt with it. Akshobhya gives us the courage to take on our anger, to develop a warriorship of the mind, which is quite different from the military warriorship of defeating others.”

The Karmapa mentioned that he usually encourages the practice of Akshobhya by citing three reasons for doing this practice. The first reason is that “due to technological progress, our actions are thousands of times more powerful than they were in the past to the point that our destruction of the environment and the harm we have done other species is literally inconceivable: we cannot hold it all in our minds.” He gave the example of killing animals, which people have always done, but these days mechanization has increased exponentially the destruction we can do. The number of animals killed in one year for our consumption is virtually inconceivable, he said. We have also caused terrible degradation of the environment. This, therefore, is the first reason for the practice of Akshobhya: the power of our actions and the negative karma we have accumulated.

The second reason is that though we are fairly sure we could solve the problems we have created, “our understanding alone is not sufficient to actually make the changes that will enable us to heal the environment. We need to feel these sad situations very strongly in our hearts, which will bring us the resolution to solve the problems.” For this reason, he said, we begin by looking at our minds, for the principle of the Buddha’s teachings is to change and improve them: we should become like Akshobhya who is not disturbed by anger.

This is important since our violence, directed towards others and fueled by anger, is an even greater challenge than environmental destruction. The Karmapa advised, “We need to achieve a state without agitation, which does not respond to violence with violence. Meditation must not be just seeking protection for ourselves, but finding the courage it takes to respond without anger to the violence in this world.”

The Karmapa remarked that the third reason is easy to explain. “There are ways to purify our negative karma but we need to learn and apply them,” he said. “The value of the tradition of Buddhism in Tibet is that over thousands of years, the Tibetans have emphasized not technological but spiritual development.” Preserved in Tibet are “the instructions of a lineage of experience and realization that allow us to overcome our problems and improve ourselves.”

The wisdom from this long lineage counsels that we should not see Akshobhya and ourselves as separate. “We want to become Akshobhya and that does not mean wearing robes like his and walking around with our hands in his mudra. We want to become the absolute Akshobhya, which is a state of realization and freedom from the agitation caused by the afflictive emotions.” To achieve this, we begin by thinking of ourselves as Akshobhya and embodying his courageous state of mind. This allows us to develop real positive qualities and that is the real point of practice.

“Our biggest problem,” the Karmapa explained, “is that we need to let go of the afflicting emotions, thinking ‘I can live without you. I’ve got something better than you.’ The only way we can have the courage to say that is if we have actually discovered something better in our minds, such as bodhichitta, love and compassion. We need to find the resources in our mind that can deal with situations more effectively than the afflictive emotions can. Without these resources, we do not dare renounce the afflictive emotions because they will seem to be our best resource in times of difficulty.”

In order that we see how harmful the afflicting emotions are and bid them farewell, the Karmapa encouraged us to develop “amazing qualities” in our mind through practicing Akshobhya. On this positive note, the Karmapa concluded his introduction to the deity for whom he would give the empowerment a few hours later.