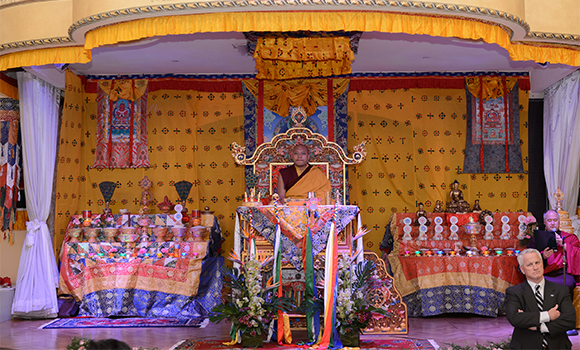 (April 13, 2015 – Queens, New York) At the request of the Karmapa Service Society, His Holiness the Karmapa offered a long-life Amitayus empowerment to several thousand members of the Tibetan and Himalayan community in New York.

Several hours before the Karmapa’s arrival, a long queue of people had already formed outside the venue, everyone eager for the chance to see His Holiness. The hall quickly filled with the more than 2,000 who had secured tickets, yet the queue outside showed no signs of abating. An overflow room for the many who spontaneously turned up without tickets soon also filled… and still the people came.

An atmosphere of palpable anticipation and mounting excitement built inside the hall and the familiar chant of Karmapa Khyenno spread among the thousands gathered as they eagerly awaited the Karmapa’s arrival. Nearly everyone in attendance was dressed in their finest silken Tibetan chubas, or other styles of traditional Bhutanese, Nepali or Indian Himalayan dress, ready to spend an afternoon in the presence of the Gyalwang Karmapa.

In anticipation of His Holiness’s arrival, a full procession had lined up on the sidewalk, complete with drums, horns, victory banners, flags and a colorful array of symbolic costumes, plus two resplendent dancing snow lions. Many passersby on this Queens street paused to take in the unusual sight. Cars ground to a halt on the road as people stopped to take photos or simply to watch, curious about what was causing such evident excitement.

As His Holiness the Karmapa entered the hall, the crowd exploded into applause and joyous cheers, in an audible demonstration of their intense affection and veneration for him. When His Holiness was seated on stage, several young Tibetan children first approached to offer him khatas in welcome, each receiving a blessing and cord from the Gyalwang Karmapa in return.

Next came joyful offerings of song and dance, including a retelling in dance of the story of King Gesar of Ling, known as the Ling Dru. Adorned in elaborate costumes, headpieces and ornaments, the dancers slowly swirled at the Karmapa’s feet and enacted King Gesar’s victory over both inner and outer enemies. The vibrant flags and banners clasped in the dancers’ hands and adorning their headpieces represented the vanquishing of all enemies and obstacles, while the hats they wore were in the style of Gesar of Ling, who is also considered to be an emanation of Guru Rinpoche.

Several traditional Tibetan songs and dances followed, with male and female performers representing eight dakas and eight dakinis arrayed before the Gyalwang Karmapa’s throne. The audience urged the dancers on with bursts of applause, lending a joyful, festive atmosphere to the largely Himalayan gathering.

After this grand welcome, which served as a powerful display of both the richness of Tibetan and Himalayan cultures as well as the high esteem in which the Gyalwang Karmapa is held, His Holiness launched straight into the opening liturgy of the long-life empowerment. The atmosphere in the room shifted tangibly as he invoked the blessings of the stainless mind of Amitayus and then conferred the long-life empowerment and blessings upon all.

As members of the audience stood to take photos or to catch a better view, and the sound of children’s calls threatened to drown out his voice, His Holiness joked, “This really is very much like being in India. I am beginning to doubt whether I actually came to the US or not!”

“This event was arranged by Tibetans and people of Himalayan origin, and I must say it really shows,” the Karmapa commented with a broad smile. “It is very nice that you are maintaining the traditions exactly as you did back home!”

After the laughter had died down, he continued, “The people of the Himalayan region have tremendous devotion to the Buddha’s teachings and a special connection with the Vajrayana in particular. Many people of Himalayan origin have gathered together here, including people from the Kingdom of Bhutan, many regions of Nepal and the Himalayan parts of India, and I am very delighted to have this opportunity to meet with all of you. We all have the same fundamental origins and culture and we must work together in harmony. We are all one family.”

“I think the point I want to leave you with,” he said in conclusion, “is that while each and every one of us has our own individual lives and work, we nevertheless each have the innate ability to help transform this world. Since we have that ability we therefore also have the responsibility to do so. I think it is very important that each of us takes on this responsibility for the healing of the entire world. By doing so our life will become meaningful and fruitful. So please make the best use of your lives, your bodies and your minds.”

After the Karmapa had departed, the huge crowd spontaneously formed a long line stretching down the central aisle. Teenagers, elderly folk and everyone in between all patiently waited their turn to place a khata on his throne or to simply touch their heads to the place he had been seated. Nearly an hour after his departure, many still waited their turn to slowly come forward and make their offerings, reluctant to leave this very Himalayan space they had shared with the object of their devotion.