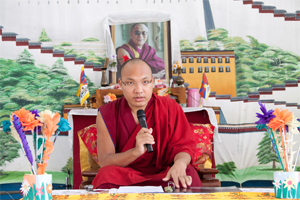 Speaking at the Tibetan Transit School His Holiness urged the students to turn their “home sickness, worries, and sadness” into strength through hard work and dedication.

“We all are same,” Gyalwang Karmapa told the students, who are recent arrivals from Tibet. “We all came from Tibet. We all have worries, sadness and maybe same aim too. I can understand you all well.”

“You have to turn your worries into your strength. You have to focus on your long term goals and study hard,” the Tibetan spiritual leader said.

Referring to the ongoing wave of self-immolations in Tibet, Gyalwang Karmapa asserted that Tibetans, in addition to understanding the situation in Tibet, should also understand the global situation.

“Since 2008, protests in Tibet have been going on and many have burned themselves in protest against the Chinese government,” Gyalwang Karmapa said.

“Without understanding the whole situation of the world; economic, political and military, actions arising only out of a surge in emotions will not work.”

The giant prayer wheel constructed by the students in honour of the 34 Tibetans who have set themselves on fire demanding the return of His Holiness the Dalai Lama from exile and freedom in Tibet.

This was the Gyalwang Karmapa’s third visit to the school.