Prophecies of the Fifth Karmapa 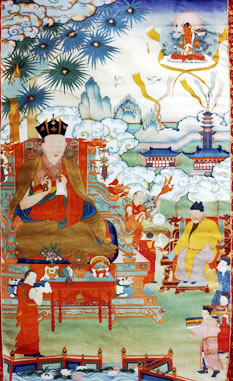 The Fifth Karmapa, Deshin Shekpa, spoke of the future Karmapa.

Some of the details of the Seventeenth Karmapa’s life were foretold in the prophecy of the Fifth Karmapa.

Some prophecies regarding the life of His Holiness predicted difficulties during the transition from the 16th to the 17th Karmapa.

In particular, the vision of Chogyur Dechen Lingpa indicates that there would be a disagreement over the Karmapa that would be resolved by focusing on the inseparability of the mind of the Karmapa and Tai Situ Rinpoche.

The prophecy of the 5th Karmapa, Deshin Shekpa (1384 – 1415), provided an even more detailed vision of the time of transition.

A Heart Emanation of Padmasambhava for Tibet

The 5th Karmapa predicted that the 17th Karmapa would triumph over obstacles which would threaten the continuity of the Kagyu lineage. The following sequence of lines, which focuses on the transition between is excerpted from the a more extended passage in the prophecy:

Prophecy of the Fifth Karmapa

At the end of the time of the Sixteenth
in the rosary of Karmapa
And at the beginning of the time of the 17th,
An incarnation of a demon (lit. “samaya-breaker”)
One with the name Na-tha (also, a “relative,”
spec. “nephew”)
Will arise in this seat, Sacho.
By the power of the person’s perverted aspirations,
The Karmapa lineage will be near destruction.

At that time, one having true aspirations
from a previous life,
A heart emanation of Padmasambhava,
From the Western direction,
One with a necklace of moles, fierce and wrathful,
Whose mouth speaks wrathful speech,
Having dark maroon colour and eyes protruding.
This one will subdue the incarnation
of the samaya breaker,
He will protect Tibet and Kham for a while.
At that time happiness, like beholding the sun
In Tibet this will occur, I think.

Without this, even if karmically virtuous ones come
The dharma will wane downwards,
As fruit of the negative aspirations of the demon.
It will be difficult for happiness to arise.

From the center the king of the center will be defiled
The emanation of a demon, an officer of high rank,
coming from Kong,
Will disturb the center and destroy the center’s domain.
Many outsiders not existing before,
[Not knowing] what has arisen, will conceal.

The beings of the degenerate times, will be
seduced by the demon.
Not having faith in Dharma, will become
full of suffering.
Upper, lower and middle, in all three regions,
Blood of disturbances and arguments will rain.
From quarrels, disturbances and debates,
There will be no place of peace even for awhile.
Except for this poor and busy state
There will be no place for riches and leisure
Except for these very tormented fetters,
There is no liberty.

Three precious ones, the three roots and
the Dharma protectors,
It is not that they don’t have compassion.
Due to the Karma of beings and the
power of aspirations of the demon,
A time will arrive of a downward decrease.
At that time the Secret Lineage Dharma,
Will have more power and bring swift blessings.

Many see in the growing activity of the 17th Karmapa the dispelling of obstacles in Tibet, India and throughout the world, and the increasingly vivid manifestation of the heart-fulfillment of vision of the Karmapas.