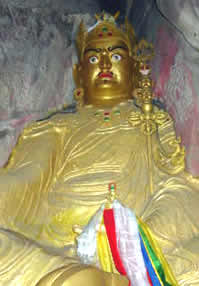 The Guru Rinpoche statue in the cave at Tso Pema, a revered practice site for Guru Rinpoche and Mandarava, one of his principal students.

His Holiness Karmapa performed the empowerment for long life for a large public audience in New Delhi’s Buddha Jayanti Park at the end of February. The previous night, the Karmapa delivered a lecture at the India International Centre, sponsored by the Tibetan study group.

On March 1st, His Holiness was at Tso Pema (Rewalasar), one of the most famous Buddhist Vajaryana holy places, where Guru Padmasambhava was said to have manifested miraculous activities with Princess Mandarava. The anniversary was particularly auspicious because it was the first during the current Monkey Year, which occurs only once every 12 years.

His Holiness the Dalai Lama presided over anniversary ceremonies in the area, in the presence of over 50,000 pilgrims.

Upon returning to Gyuto, His Holiness attended teachings in March in Dharamsala by HH Dalai Lama, who lectured on Patrul Rinpoche’s Words of My Perfect Teacher and The 100,000 Songs of Milarepa. In the morning, His Holiness also studied the Hevajra Tantra with the Very Ven. Bokar Rinpoche, at the temporary headquarters of the Karmapa at the Gyuto Tantric University in Sidbhari.