Tibetan Organizations in Switzerland meet with the Gyalwang Karmapa 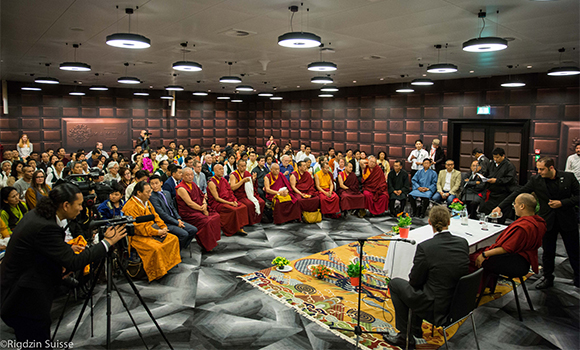 May 27, 2016 – Zurich, Switzerland
This afternoon the Gyalwang Karmapa met with 118 representatives of the many organizations in Switzerland connected to the Tibetans. The list of both NGOs and governmental groups attests to the deep connections the Tibetans have created in Switzerland and the structures of support they have established to sustain the Tibetans living here. Organized by the Tibetan Community in Switzerland and Lichtenstein, the gathering included people from its three sections (the Tibet School, the newsletter plus website, and folklore) as well as Khen Rinpoche and the monks from Tibet Institute Rikon, acting and retired government representatives, the officers and staffs from the Three Provinces of Tibet, the Tibetan Woman’s Association, the Tibetan Youth Association in Europe, the Swiss-Tibetan Friendship Association, and finally, the Mirap Sarpa (New Generation) Association.

After an introduction, the Gyalwang Karmapa expressed how happy he was to be in Switzerland and how he had wished for a long time to travel here but various obstacles had prevented him from doing so. He now looked forward to sharing his ideas with them. He mentioned that after his last trip to the United States, he had a meeting with His Holiness the Dalai Lama and one of the topics they discussed was the three traditional divisions of the Tibetan cultural area into Utsang (Central Tibet), Kham (Eastern Tibet), and Dome (Amdo) and how important is was for them to come together as one country. This was the wish of the His Holiness and in addition, the Karmapa stated, the persistence of this separation causes a lot of problems within Tibet itself.

Turning to his own experience, the Karmapa related that when he was young, he had never heard of the concept that the three regions should become a single country. He was born in an isolated place of Eastern Tibet (Kham) and thought of himself as a Khampa, while the people living in Central Tibet he considered to be Tibetans (Popa). He thought of the two as being quite different and separate. However, these days it is critical that the Tibetans consider themselves as one people living in a single country known as Tibet. This idea needs to be held in a stable and profound way. It would be difficult, the Karmapa remarked, for one person to bring this about. If we use violent means, such as war, people will not sincerely feel this unity within their heart of hearts.
Therefore, the people have to bring about the change within themselves.

The Karmapa then spoke about prejudice between the different traditions of Tibet. He mentioned that Tibetans newly arrived from Tibet told him that there was more bias related to one’s tradition in India than in Tibet. “So we have to be careful,” he counseled, “ and remember that we escaped Tibet so that we could benefit all the Tibetans and build a new society.” Sometimes, however, we lose our goal he said, and forget our commitments, becoming caught up in what profits us personally and in our own position. This is a great danger, the Karmapa said.

Reprising themes from this morning’s talk with Tibetan youth, the Karmapa talked about the need to study the Tibetan language and about the decreasing population of Tibetans. He also briefly spoke of the self-immolations and how sad they had made him feel. People had made a great sacrifice and yet it has had not changed the situation in Tibet. He encouraged others, therefore, to remain alive, to study and work for the cause of Tibet, for people who have such sincerity and dedication are needed and they are rare.

The Karmapa closed his remarks by saying how happy he was to be in Switzerland and in praising the Tibetans here for the wonderful work they are doing. The floor was then opened up to questions.

The first question asked about art, and in particular, painting, and also about his role as the Karmapa. The Karmapa responded that he personally likes to paint and also has an interest other arts, such as writing. Tibet has a long history of painting, he noted, and these days the number of painters in Tibet is increasing because they are able to find good payment for their work. The Karmapa himself also supports practioners of this traditional art.

In turning to his personal history, the Karmapa remarked that from the time he was recognized until now, he did not have the feeling or pride, the conviction that he was the Karmapa. “I think of myself as an ordinary person,” he said, “who has been given a wonderful opportunity to help people and the teachings, and also received the benefit of the lineage of the Karmapas.” But he added, “when I read their spiritual biographies, I feel that I’m a ten or a hundred thousand kilometers behind them.”

He continued to say that the older generation here knows of some the difficulties he has gone through, which he has had to face alone. He has big plans for the Tibetan people, he recounted, but he wondered how they could be successful without real support. It is perhaps due to all of this, that his emotions naturally appear when he talks to people or writes.

At the end, the president of the Tibetan Community in Switzerland and Lichtenstein thanked the Karmapa for coming and also the organizers for all their hard work. Afterward individuals offered their scarves and received a blessing from His Holiness.