Thousands of Tibetans Gather to Meet the Gyalwang Karmapa 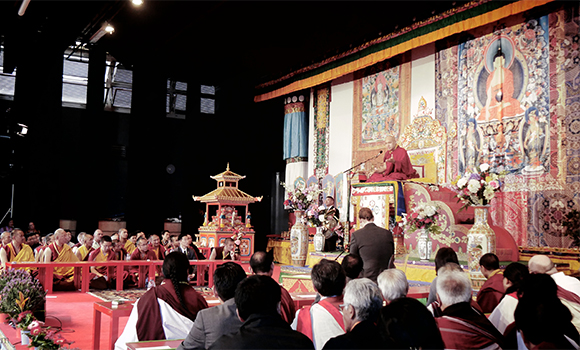 May 28, 2016 – Bulach, Switzerland
The City Hall of Bulach was filled to the brim with Tibetans who have come to receive the Karmapa’s blessings. After he arrived on stage and took his seat, young Tibetan women and men in traditional dress, standing in front of the audience sing a special song for the occasion. Drum, flute, bells, and the dranyen, sometimes called a Tibetan guitar, accompany their voices, while their song has the refrain, “Our place of trust is the Karmapa, the lama in who we can believe.”

His Holiness began with his prayers, which he followed by a transmission of the six-syllable mantra of Avalokiteshvara. He then spoke from his heart to the Tibetans, expressing his sympathy for all the unprecedented difficulties they have gone through. However, we do have, he said, the omniscient HH Dalai Lama who supports all the Tibetan religious traditions and works tirelessly to help the Tibetan people abroad and in India. We should all be deeply grateful to him, the Karmapa stated, and try to fulfill his wishes.

The Karmapa then revisited topics central to his thinking. He spoke of the need for Tibetan unity, for the three traditional areas of Tibet to consider themselves as one people and one country. He also encouraged Tibetans to remember why they had left Tibet and the lack of freedom they had experienced there. They should sometimes bring to mind, he counseled, the Tibetans who remain in Tibet and hold them in their affection. Finally, the Karmapa stressed the importance of learning Tibetan well, since it gives access to their precious heritage of the Dharma and the Tibetan culture.

Towards the end of his remarks, the Karmapa emphasized how important it is for the Tibetans to be in harmony with one another, to be free of bias toward their place of birth and their particular religious tradition. He himself is forgetting that he is from Eastern Tibet, and of course, he thinks about the Kagyu lineage as he has the name of Karmapa, yet he sees all the Tibetan traditions as being the precious teachings of the Buddha. It is critical to keep this in mind, since it is said that the cause for the decline of the Buddha’s teachings is not something exterior, but the internal conflicts among Buddhists themselves. After expressing his wish to return to Switzerland many times, the Karmapa closed his talk in wishing everyone very good health and success in all their endeavors.