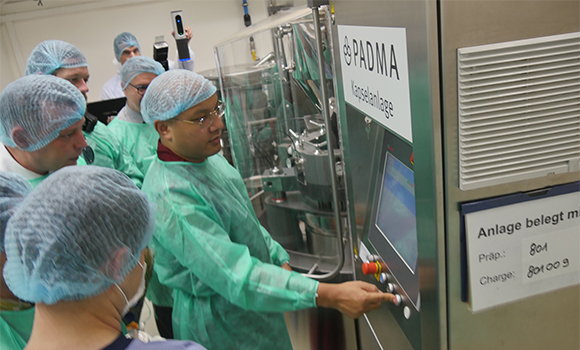 May 25, 2016 -Wetzikon, Switzerland
This morning the Gyalwang Karmapa traveled to a small town just outside Zurich to visit the offices and production site of Padma Company, which manufactures a variety of Tibetan medicines. The organization will soon celebrate its fiftieth anniversary. The Karmapa first visited the production site, where in an area outside the factory rooms, a brocade-covered chair had been prepared and a thangka of the Medicine Buddha set above and behind it.

After the Karmapa arrived and took his seat, the CEO of Padma, Mr. Herbert Schwabl, introduced the Karmapa to the history and products that Padma makes. He explained that two of the herbs they use are grown in Switzerland and the rest are purchased from all over the world. After so many years, a blend of Swiss and Tibetan medicine is evolving, he said; when they cannot find the traditional herbs, they also experiment with locally available substitutes. A special aspect of the work in Switzerland is the government’s official recognition of Tibetan medicine⎯the only country in the West to do so. Padma is now the process of applying for European recognition.

A lab technician, dressed in a white coat, brought in a cart with samples of their medicines, which are packaged like European products in blister packs and elegant boxes. Mr. Schwabl explained that the Tibetan tradition is followed in preparing the powdered herbs, yet to accommodate westerners, instead of the traditional loose pills, the medicine is put in capsules, which make them easier to take.

Padma’s remedies treat a variety of problems, such as liver dysfunction and the common cold. Four of these medicines have been nationally recognized and ten locally, which is an excellent endorsement since Switzerland is famous for quality of its products. Padma also follows the GMP (Good Manufacturing Production), which is an international pharmaceutical standard. The Karmapa was then shown how the herbs are checked for quality in the lab to make sure that there are no pollutants in the components, such as pesticides.

Mr. Schwabl concluded his presentation in saying that Padma has the motivation to help people, not just to produce medicine. “Our mind and heart is in Tibet and Switzerland,” he said, “ and we work with the different aspects of both cultures with the wish to benefit many people.”

The Karmapa opened his remarks by thanking the people working at Padma and he praised them for working in harmony with science to sustain the Tibetan medical tradition. Their efforts will become part of Tibetan history, he stated. “The governments of India and China also support Tibetan medicine,” he said, “however, in terms of maintaining high quality and engaging in research, Padma is a model for the whole world.” Their enthusiasm and dedication has greatly benefited Tibetan medicine, he added, and it is also possible that in the future, Tibetan medicine will be able to provide remedies for modern illnesses such as cancer.

Several of the Karmapas, he remarked, have had a special connection with Tibetan medicine. For example, the Third Karmapa, Rangjung Dorje, developed one hundred new medicines with different potentials. When the Sixteenth Karmapa escaped from Tibet, he brought with him a special treasury box, which was mostly filled with Tibetan medicines. The Karmapa said that he himself was not knowledgeable about the medical tradition, but he strongly supported and encouraged its development.

The Karmapa was then invited to tour the facilities, which are kept sterile, so everyone had to don special coats, hats, and coverings for their shoes. Complex machines, organized into three stages, produce the medicines: mixing the herbs, packing them in capsules, and placing these in modern packaging. Only a few people accompanied the Karmapa inside, but the tour was projected into a screen that all could see.

In parting, Mr. Schwabl asked the Karmapa a classic question. He said that they do not invent medicine at Padma like the Third Karmapa, but do need to adapt the tradition to the situation of this modern world in which they find themselves. “We are in a tradition, but we need to modify it,” he said. “We work with the authorities and some herbs are allowed an others not. Some people tell us that we are too modern and that the tradition should be kept just as it is.’ So he asked the Karmapa, “Should we keep to tradition or is what we are doing correct?”

The Karmapa replied, “You should work in harmony with the place where you are. Tibetan medicine has changed before and can be changed again. For example, in India, we cannot get some of the components and so substitutes are used.” He added, “There is a lot to be done and I support you in developing these changes, which should be made by people who know medicine well. The main thing it to benefit people.” He concluded, “Some people say tradition is more important. I do not agree.”

Afterward Mr. Schwabl introduced the staff and invited the Karmapa to visit the main offices of Padma in another site. This visit to Padma clearly illustrated how a Tibetan tradition could be transplanted to the West and not only thrive but continue to develop.