A Visit to Tibet Institute Rikon 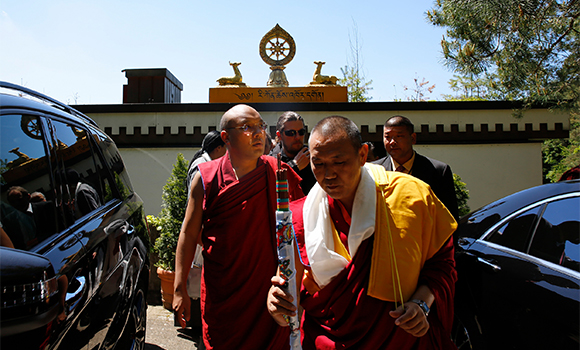 May 25, 2016 -Rikon, Switzerland
On the way to the Tibetan Institute in Rikon, the Karmapa stopped to have lunch at Junger Farm where he found a familiar sight: two yaks grazing on the hillside. He could also hear the familiar sound of a conch shell but this time playing in fusion with the Swiss Alpenhorn. In this idyllic setting of flowers and rolling hills, many Tibetans came to greet the Karmapa.

After lunch he continue through the gently rolling landscape, to the Tibet Institute, located on a hillside and surrounded by forest. A large group of Tibetans were waiting to meet the Karmapa, sitting in a cascade down the slope. The temple was constructed in a modern style with floor to ceiling windows and light streaming in. The central figure on the shrine was a statue of the Buddha, and in front a tiered table was filled with offerings, topped by five tall tormas (traditional butter sculptures).

After he arrived, the Karmapa walked slowly down the hillside, stopping to greet people on his way into the shrine hall. Once on the throne, the Karmapa was presented with a mandala and offerings while prayers were chanted in Tibetan. The Karmapa was further welcomed in the traditional style with white scarves, sweet rice, and Tibetan tea.

The Institute, whose construction started in 1967, follows a nonsectarian way and serves as a common place of meeting for all Tibetans in Switzerland. It seeks to promote the study of Tibetan history, language, and culture. It shelters a fine library and has a connection to the University of Zurich.

The Gyalwang Karmapa began his talk by giving his greetings to Khen Rinpoche, to the head of the Institute and its officers as well as to the representatives of the Tibetan people. It is over fifty years now that Tibetans first came to the West, he commented, and Switzerland was the first western country to receive them in large numbers. “It has become a second home for Tibetans,” he remarked, “and this Institute has become a sign of the deep relationship between the Swiss and Tibetan peoples.” The Karmapa related that he had wanted to come to Switzerland for a long time and now that he had finally arrived, he experienced a special feeling.

This Institute, the Karmapa stated, makes a valuable connection between the cultures of the East and West and between the younger and older Tibetans. Following the wishes of His Holiness the Dalai Lama, it is important to support it. The Karmapa noted that both in Tibet and Switzerland, the weather is cold and people like to be outside in the sun, so he suggested that they move into the garden. There a photographer was waiting to record a formal picture of the visit: Tibetan and Swiss people standing together with the Karmapa in the middle, all bathed in the warm afternoon light.