Fostering Interreligious Dialogue: The Gyalwang Karmapa Visits the Rigpe Dorje Center in the House of Religion 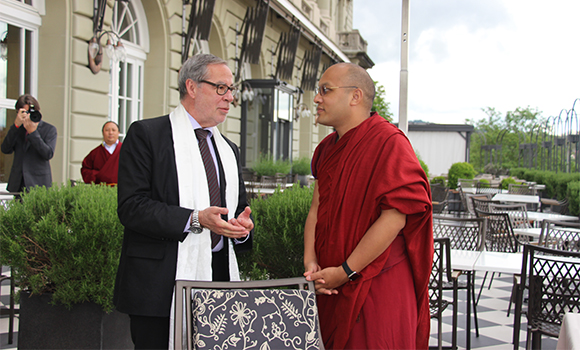 May 24, 2016 -Bern, Switzerland
On his way from Lausanne to Bern, the Karmapa stopped today at Thupten Jamtse Ling Dharma Center to give a blessing to this lovely place of practice. It was founded by Patrick Stillhart, whose generosity has helped centers of different Tibetan Buddhist traditions to find a home in Switzerland.

Afterward the Karmapa traveled north to Bern for lunch with the Mayor of Bern, Alexander Tschäppät. They especially talked about the unique House of Religion in Bern, completed just a year and a half ago, which was financially supported by the city as well as many different religions. The House of Religion is home to a Hindu temple, a Christian church, a Muslim mosque, an intercultural Buddhist shrine hall (for many different Buddhist traditions), and a place of worship for an unusual tradition from Tamil Nadu known as the Delagh of the Alevits. Three other traditions⎯Jewish, Sikh, and Bahai⎯ participate in meetings and some sit on the Board of Directors.

Also attending the lunch was the managing director, David Leutwyler, who mentioned the importance of having authentic places of worship and the positive effect of the different traditions being together in the center. The simple daily connecting over work builds natural connections and allows for an understanding deeper than mere tolerance. The House is a powerful symbol, he said, showing that different religions can live and prosper together. The President of the House of Religion, Dr. Gerda Gauck has been with the organization since its beginning in 1998. She mentioned how impressed she was by the Karmapa’s openness to what they had to say about the House of Religion and his understanding of how important diversity is.

After this lunch, the Karmapa paid a visit to the House of Religion itself, which is home to the Rigpe Dorje Center. Begun in 1993, this practice group was inspired by the Third Jamgon Kongtrul Rinpoche and named after his teacher, the previous Sixteenth Karmapa, Rigpe Dorje. In addition to sponsoring meditation and study, the organization is devoted to Jamgon Kongtrul’s welfare projects, including a school for poor and orphaned children in India, an old people’s home nearby, eye and medical clinics, and two monasteries with facilities for advanced study and long retreats.

To welcome the Seventeenth Karmapa, the entrance hall to the House of Religion and all the paths inside the Karmapa would take were lined with deep red and golden yellow rose petals as well as clusters of bright flowers. A large group of well wishers, including over 300 Tibetans, lined the way inside with their long scarves of welcome.

For this special occasion, the Buddhist space in the House of Religion had been transformed into a Tibetan shrine hall with a new throne built just for the occasion and thangkas of Vajradhara, Guru Rinpoche, and Amitabha. On one side was a formal image of the Third Jamgon Kongtrul and across from it, a photograph of the next generation⎯the Seventeenth Karmapa and the Fourth Jamgon Kongtrul together. Georg Streit, the president of Rigpe Dorje, welcomed the Karmapa and introduced him to the variety of Buddhist groups of different traditions that had gathered today.

After warmly greeting everyone, the Karmapa began his talk by saying that it was his first visit to Bern and that he was happy to learn about the House of Religion where different traditions coexist in harmony and dialogue with each other. It is important to practice well in one’s own tradition, the Karmapa counseled, and also to respect and study other traditions.

He then spoke of the First Jamgon Kongtrul, Lodro Thaye, a famous master and scholar of the nonsectarian movement in nineteenth century Tibet. The Karmapa was delighted that the openness and tolerance the House of Religion embodies was in true harmony with the vision and activity of this great Tibetan spiritual leader. In the past, the Karmapa commented, religions have been a source of great conflicts, and Jamgon Kongtrul tried to overcome this tendency through his work. The House of Religion is pursuing a similar goal by bringing religions together in dialogue and fostering mutual understanding of the beauty in each one.

The Karmapa closed his talk by saying that he was very happy to have made this initial connection with the people in Bern and that he hoped to return again and again.