The Procession of the Sixteen Arhats

The Kagyu Mönlam is an auspicious gathering that generates immense devotion in its participants, and amongst its events, none does it more than the Procession of the Sixteen Arhats, which took place in the morning on the sixth day. Anticipation began the evening before, with the announcement that Mönlam Members were to line up to frame the procession, and that all participants would have the opportunity to make an offering.

In the morning, Mönlam participants arrived to find the Pavilion transformed. The central aisle had become a beautifully elaborate carpet of flowers, leading up to a giant golden bowl overflowing with piled fruits. Precious seats for the Sixteen Arhats were laid out on the main stage, where a black pagoda shrine occupied the centre ground.

More transformation was in store. In the short space of time for Sojong vows and the first morning prayers, a red carpet walkway strewn with orange and yellow petals had appeared outside. Mönlam Members lining up along it, some still finishing their breakfast, all with their katas at the ready, quickly filled the short stretch from Tergar Monastery to the Pavilion.

With the sun rising out of the early morning haze, the opening prayers from the Prostrations and Offerings to the Sixteen Elders were heard from the Pavilion, and simultaneously the sound of jalings rang out from Tergar. Victory banners and parasols emerged, signalling the start of the procession, which slowly came into view. Under each parasol was one of the Sixteen Arhats in a mask and costume, faithfully represented with the attributes described in the Prostrations and Offerings to the Sixteen Elders. Each arhat was accompanied by an attendant, similarly in character, carrying the parasol. Behind the Arhats came groups of monks with alms bowls. The head of the procession entered the Pavilion to the sound of music succeeding the prayers inside, their soft measured steps barely disturbing the carpet of flowers as their solemn progress neared the stage, where His Holiness Karmapa waited.

With self-possessed precision the Sixteen Arhats, their attendants and the accompanying monks proceeded up onto the stage and fell into position. Closing the procession, a spectacular golden statue of the Buddha was wheeled in and placed inside the pagoda shrine, flanked by two more masked and costumed Elders with ringing staff and bowl, representing the Buddha’s main disciples, Shariputra and Maudgalyayana. The final group of monks escorting the statue and taking their places on the tiered seats either side of the stage could well be described as ‘innumerable’, and must have given Mönlam participants a small taste of what the Buddha’s wanderings with his company of bhikshus over these very lands may have been like.

The Twenty-Branch Monlam prayers resumed, and the stage was made ready for the offerings. A laden basket was placed at the feet of each of the Sixteen Arhats, and katas were draped around the giant golden bowl. When the prayers ended, the Arhats under their parasols and the Elders exited the stage, and their places were taken by their monk attendants.

The last and longest part of the event, which lasted the remainder of the morning session, began: monks and nuns and lay followers, Tibetan and foreign, came up with their individual offerings in a long but orderly line which ran the length of the Pavilion. The mantra changed back and forth from Namo Shakyamunaye to Karmapa Khyenno. Bags of fruits, tubs of sweets, cartons of biscuits filled sack after sack and, most importantly, the generousness of the offerings swelled the hearts of all those who shared this moment. 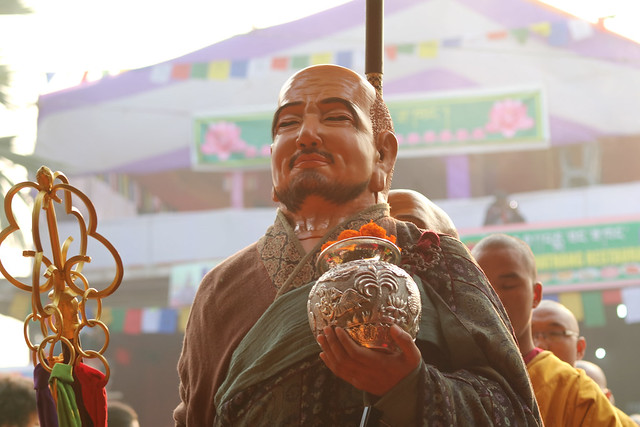