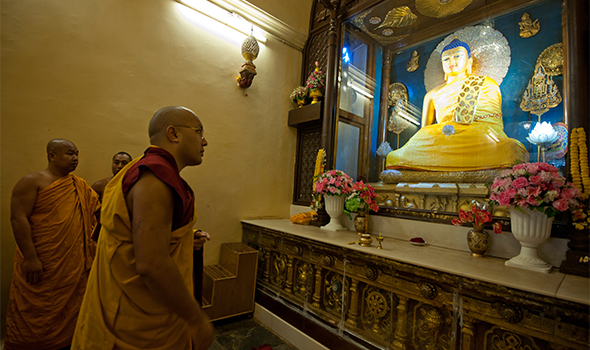 (5 November, 2014 – Bodhgaya) The Gyalwang Karmapa left Tergar Monastery at 9 am today to pay homage at the central shrine of Buddhism, the Mahabodhi Temple, home to the Bodhi tree and other sites linked with the time when Shakyamuni Buddha attained enlightenment.

Gyalwang Karmapa walked into the complex, down the central steps and headed directly to the Mahabodhi temple shrine room. Devotees from around the world greeted him along the way. Flanking both sides of the pathway, they proffered pink and lilac lotus blossoms or ceremonial white scarves, and asked for his blessing. Inside the shrine room, His Holiness first offered a three-piece set of robes of hand-woven golden silk to the image of Lord Buddha, followed by seven bowls of fruit, flowers and food. As the monk-attendant draped the new robes over the Buddha image, His Holiness prostrated three times before commencing prayers in praise of Lord Buddha and for the peace and well-being of the world and all sentient beings. The short ceremony concluded with the lighting of a butter lamp.

When His Holiness emerged from the shrine room, hundreds of followers thronged behind him as he completed a circuit of the inner route around the temple, followed by a circuit of the outermost route.

This is the first official event of the Gyalwang Karmapa’s 2014 winter programme in Bodhgaya.

In Bodhgaya His Holiness will preside over the Eighteenth Kagyu Guncho, which will be held from 20th November to 17th December, 2014. Participants from Kagyu Shedras will discuss and debate the topics of Advanced Collected Topics, Types of Mind, and Types of Evidence. His Holiness the Gyalwang Karmapa will continue his teachings from Mikyö Dorje’s Hundred Short Instructions, and the Guncho will conclude with a four-day conference discussing Gampopa’s Jewel Ornament of Liberation.

His Holiness will bestow a special series of initiations, the twenty-four peaceful deities of “Knowing One Frees All”. This is the special program prior to the 32nd Kagyu Monlam. From 20th – 25th December, 2014.