Honoring the Words of the Buddha: The Kangyur Procession

In the Monlam Pavilion the night before the procession, the Gyalwang Karmapa, a consummate director who pays attention to the smallest detail, rehearsed the monks and nuns who would be carrying the Kangyur texts the next day. As they sat on the floor before him, he spoke to them about the significance of this event. “These texts hold the precious words of the Buddha, and you will carry them as you circumambulate the place of the Buddha’s enlightenment. This will make an auspicious connection for his teachings to flourish and spread throughout the world.” The sangha members then practiced walking with a paced dignity, passing out into the cool evening and coming back in the Pavilion as the Karmapa watched.

He advised them, ”Those in the procession should recite the mantra (Namo Shakyamunaye, “Homage to Shakyamuni Buddha”) and visualize that the Dharma is pervading the whole universe. You should carry yourselves in a way that inspires respect in those who see you.”

Early in the morning of the 17th, disciples holding pink lotuses, garlands of marigolds, and tall gladiolas lined the outer circumambulation path and the steps from the main gate, down the cental path, and into to the inner sanctum of the stupa. A sign on a slope says, “Karmapa Khyenno. Kagyu Sangha Monlam Chenmo. Prayers for World Peace.” Soon after 8am, the Karmapa and his entourage arrive and pass through the crowds into the main temple with its famous state of a radiant Buddha. After offering him robes, fruit, and prayers, the Karmapa emerged and walked around to the Bodhi Tree on the backside of the stupa where the four main rinpoches don their Gampopa hats, and the 103 volumes of the Kangyur are distrubuted among the sangha.

The procession is led by an incense bearer, followed by jalings (a Tibetan oboe), conch shells (symbolizing the spreading of the Dharma), and two more incense bearers. In the front of the procession in ascending order of hierarchy, is Shiwalha Rinpoche, Mingyur Rinpoche, Zurmang Garwang Rinpoche, Gyaltsap Rinpoche, and finally His Holiness the Gyalwang Karmapa. They are followed by the precious teachers of the Dharma, the Kagyu khenpos, then the fully ordained monks, and selected nuns and other monks. Moving at a stately pace, they move up the stairs and circumambulate the stupa on its widest path. When the procession returns to the Bodhi Tree, the texts that have been carried in procession are covered in a bright layer of flower offerings.

For the entire morning at the Pavilion itself, the rest of the monks, nuns, and lay members of the sangha who know Tibetan have been engaged in another traditional practice related to texts—reading the Kangyur aloud. Pages have been distributed throughout the crowd, and it is wonderful to see how many people in addition to the ordained sangha know Tibetan—from the older generation of gray-haired Tibetans to the teenage Tibetan Dharmapalas helping to guard the place of practice plus western and eastern disciples of all ages. It is a clear visual reminder of what the Karmapa and the Dalai Lama have often said about the sangha. It is made up of four pillars—the ordained monks and nuns and the male and female lay practitioners. In the lambent sun of this peaceful morning, all of them have performed two traditional practices with the deep wish that the Dharma continue to flourish and bring its benefits to the modern world and beyond. 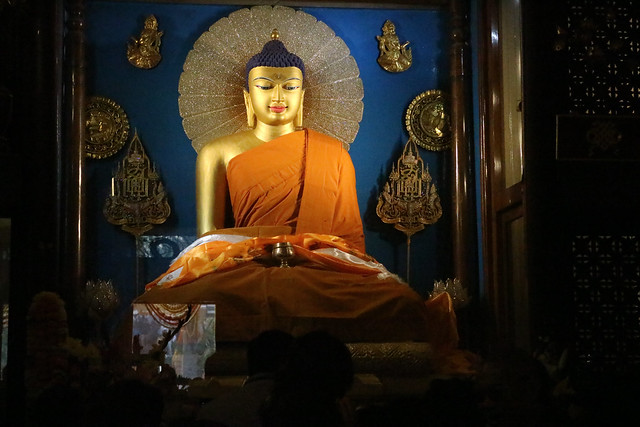