February 6, 2017 – Monlam Pavilion, Bodh Gaya, India
On this remarkable day, after two days of initial rituals, the followers of Gyalwang Karmapa had, for the first time, been given the opportunity to receive the grand empowerment of Chakrasamvara from the head of the Kagyu lineage.

His Holiness introduced the initiates into the meaning of Secret Mantra clarifying that the word “mantra”, in Chinese translations, means “the words of truth”.

“It is when we speak in accordance with the nature of how things are, the power of those words, and the way of bringing benefit to the world through that power,” he said and illustrated the point with stories of Angulimala and Buddha Akshobhya. The Angulimala Sutra tells of Angulimala encountering a pregnant woman unable to give birth. Buddha advised that Angulimala, who had killed many people in the past, could, by the power of the truth of his resolve not to kill anymore, help that woman give birth easily. At the time he was a bodhisattva, the protector Akshobhya made the vow to never get angry at anyone, which he kept until reaching buddhahood. His name, the Immoveable, signifies the verity of his unwavering resolve.

His Holiness explained that though it is said there are millions of Mother tantras, Chakrasamvara is the quintessence of them all. Of the three Indian sources of the Chakrasamvara tantra—Luipa, Kandipa and Krisnacarya( (Skt. Kṛṣṇācārya)— it was the one from Luipa, passed down through Naropa and then Marpa the Translator, which he was bestowing.

The 17th Karmapa then imparted the Madhyamaka tradition Bodhisattva vows by following the words found in The Way of The Bodhisattva initially in Tibetan, and repeated in English and Chinese. He expounded on the symbolism of the vajra as the ultimate bodhicitta that focuses on the Svabhavikakaya essence. As the “prajñā that realizes emptiness”, it breaks the iron cage of ego clinging.

Once the empowerment had been given, the siddhis were conferred to everyone present by Yongey Mingyur Rinpoche, Drupon Dechen Rinpoche, Gyaltsen Rinpoche and Ringu Tulku Rinpoche. While this was happening, His Holiness enumerated the 8 commitments of the refuge vows given the previous day: the need to serve the guru, listen to the dharma of the Buddha, properly examine the teaching, seek liberation, be careful of your actions of body and speech, keep the vows whether they are the day-long fasting vows or the 5 lay precepts, be affectionate and compassionate to sentient beings and make offerings from time to time. He concluded with a short comment on the boddhisattva vows, the principal one being not to give up on sentient beings.

As the assembly slowly dispersed, the Gyalwang Karmapa performed the closing ceremony of the mandala’s dissolution, yet another elegant and vivid reminder of the empty nature of all phenomena. 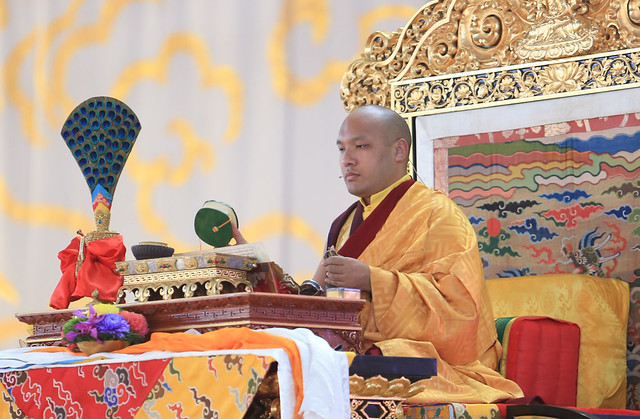